With more art than you can possibly see being showcased everywhere in Berlin this coming Gallery Weekend, do not despair – we are here to help you out! Here comes our ultimate guide to the must-see exhibitions. 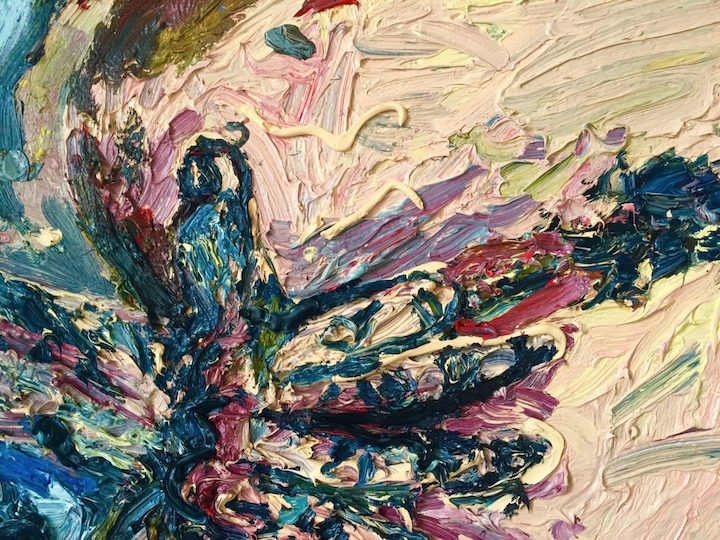 Alex Becerra, courtesy of the artist and weiss Berlin

Get a head start to the weekend at weiss berlin, who are opening their first exhibition of Alex Becerra’s work one day ahead of the main Gallery Weekend vernissages. The gallery only recently opened its doors to the public, but has already attracted a lot of attention positioning itself internationally with many top-notch american artists. Alex Becerra’s viciously grotesque paintings, drawings and sketches clearly locate themselves in the history of European and German painting. Figurative, as well as abstract works are layered and the materials worked in an incessant search for the right colour scheme, the right composition, the right line.

Having checked off the first exhibition on the list its tine to start the weekend with a bang! STUDIO PICKNICK opens with an exhibition plus after-party for the winners of the Meisterschülerpreis of the University of the Arts Berlin. Elisa Ewert, Markus Hoffmann and Rona Kobel are the lucky three artists, whose show includes ceramic works, photography and sculpture. After that the after-party begins at nine and in true UdK style, will not to be over before the early hours of the morning.

By Friday evening you should have detoxed the hell out of your hangover in time for the climax of Gallery Weekend centring around Mitte. We have devised a smart route through the area taking you to our favourites.

Start the evening at Dittrich & Schlechtriem, where another UdK Meisterschüler, student of Olafur Elliassons 2012 class, has turned the gallery space into a cabinet of geological curiosities. Julian Charrière has created sculptures made of melted magma enriched with smartphones, Ipods and laptops, thereby questioning the geological sustainability of our digital world. His natural history museum of the possible post-digital era speculates on the outcome of the anthropocentric age, in which humans shape the fate of the earth.

Julian Charrièrre, courtesy of the artist

One of the blockbuster exhibitions will be a group show curated by the influencial german artist Tobias Rehberger. He invited all of the artists musicians and creatives, who over the years have inspired him, to a dinner, where everyone was committed to bringing an art work they made. In return a gift of his own  was given to each friend. Each pair of gifts are exhibited next to each other at neugerriemschneider.

A dizzying 65 well-known artists are represented, such as Ai Weiwei, Pawel Althamer, Olafur Eliasson, Martin Kippenberger, Stefan Kozalla, Louise Lawler, Wolfgang Tillmans, Luc Tuymans, Sven Väth and Danh Vo. The show is actually an art project itself – reminding us, that the artist can never be the one true genius author of a certain piece and honouring and documenting the influences of friends and collegues of the last 21 years.

Not officially in the Gallery Weekend programme, but nonetheless worth experiencing while you are in the area is Carsten Nicolai’s installation work at Galerie Eigen + Art. In a serene darkened room the artist has hung the walls with neon lights, lighting a rotating elliptical bowl. It is filled with clear liquid, which reflects the harsh light and magnifies its impact.

The Auguststraße and Linienstraße are the hub of art galleries in Berlin and the sidewalks will be alive with the art crowd. Enjoy this annual festival of art by simply taking an evening walk through the neighboorhood, stopping by to see some art and sipping an aperol spritz at one of the classy bars on your way. 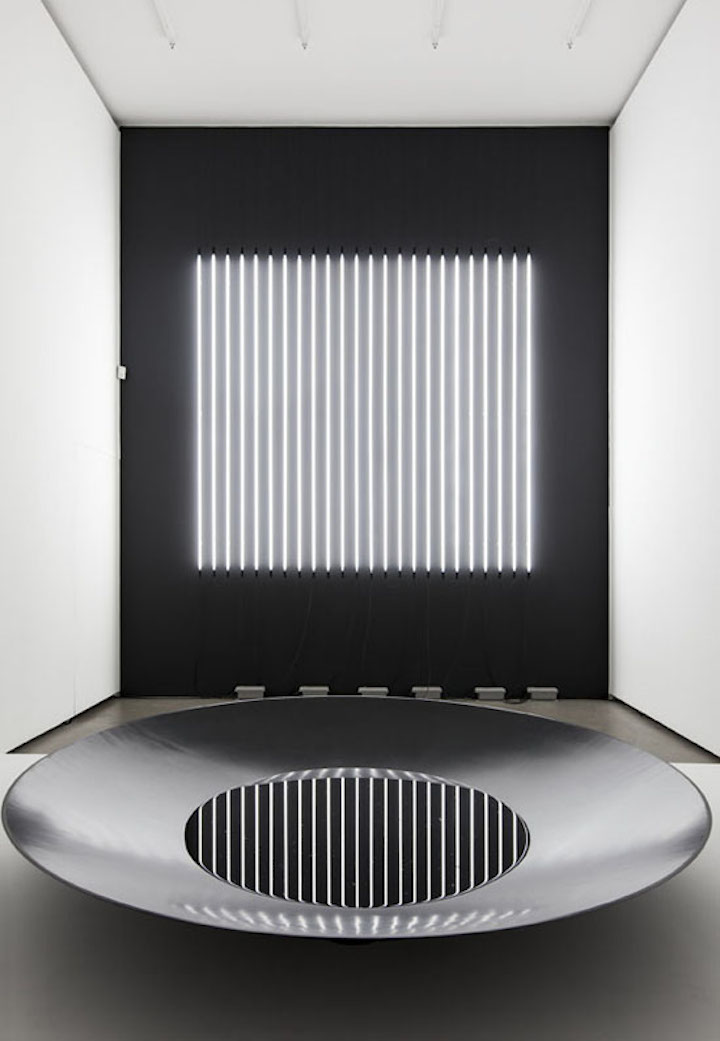 When you have reached the end of the street party that is gallery weekend, you should come out the other end at Rosenthaler Platz. Before you hit the bars, find a delicious place to eat out or fall into bed from too much visual input – there is room for one more stop: Tobias Zielony at KOW on Brunnenstraße.

The berlin-based photographer has documented several activists protests in Germany concerning the ongoing migrant crisis. He then let the images he created be published by newspapers in the countries, where refugees flea from towards northern Europe. These impressive images call into question our western narrative about the political subjectivity of the refugees, about their status as citizens and the impact of photography on world news.

On Saturday take a tour through the art galleries round about Friedrichstraße, stopping by the Spree at Potsdamer Platz and ending Gallery Weekend in Charlottenburg.

First up is Daniel Marzona, who is showing the newest works by Olaf Holzapfel. The artist is a renowned german sculptur and his latest works question humans relationship with landscape and nature. For material he has used straw, cacti and other fibrous matter to create structured pictures and installations.

Another student of Olafur Eliasson, Julius von Bismarcks work is concerned with humans interaction with the natural world – questioning the supposed duality of nature/culture and science/art. Considered one of the shooting stars of the younger Berlin art scene, Bismarck has won several prizes and residencies, including the artists residency at CERN, the European Organization for Nuclear Research. See our review here! 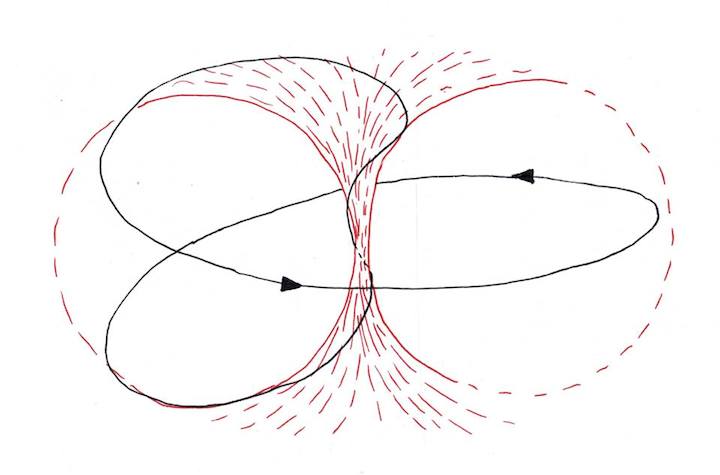 Sketch by Julius von Bismarck for the exhibition, courtesy of the artist

From Stadtmitte its not far to Esther Schipper’s presentation of Tomas Saraceno’s second solo exhibition with the gallery. His large-scale installations reimagine possible futures in architecture, influenced by spiderwebs, clouds and natural phenomena. The “Aerocene” project speculates on post-urban cities, in which we all could live in giant balloon-like structures, floating through earths atmosphere like spiders on silken webs. Aerocene is Saraceno’s answer to the Anthropocene.

Wolfgang Tillmanns theme for his 12th solo exhibition at Galerie Buchholz is the place where he spends most time: his studio. Tillmanns does not explore this classical genre by glimpsing behind the scenes photographically. Keeping with his conceptual take on photography and installation, the artist has instead displayed what the studio means for him. 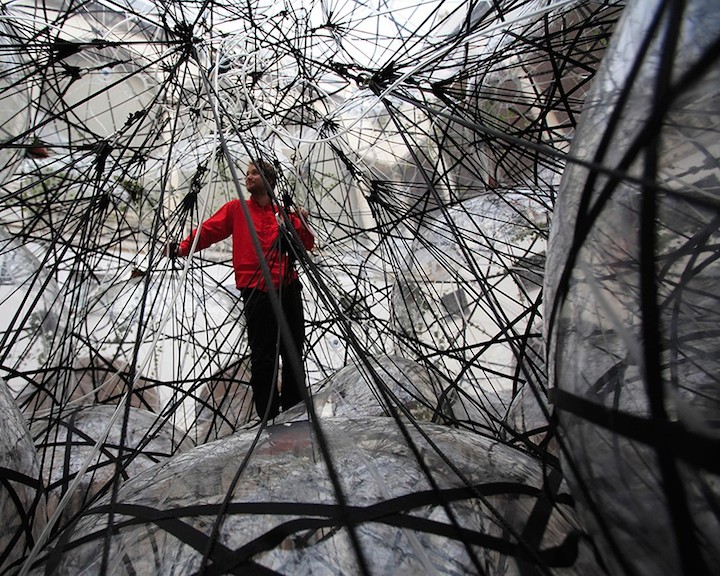