At the end of May we travelled from Treviso to the beautiful seaport city of Trieste at the northernmost end of the Mediterranean Sea to visit the opening of the “Join the dots / Unire le distanze“ show, an Imago Mundi exhibition that features 40 collections. Imago Mundi is a non-profit, democratic and global project promoted by the Luciano Benetton Collection that had its inauguration in August 2013 at the Fondazione Querini Stampalia during the 55th Biennale di Venezia. Since then Imago Mundi exhibitions have toured Italy and the world, always promoting a different country-specific focus as seen by the participating artists of the country concerned. “Join the dots / Unire le distanze“ is in short about embracing the potential of art to bridge distances. 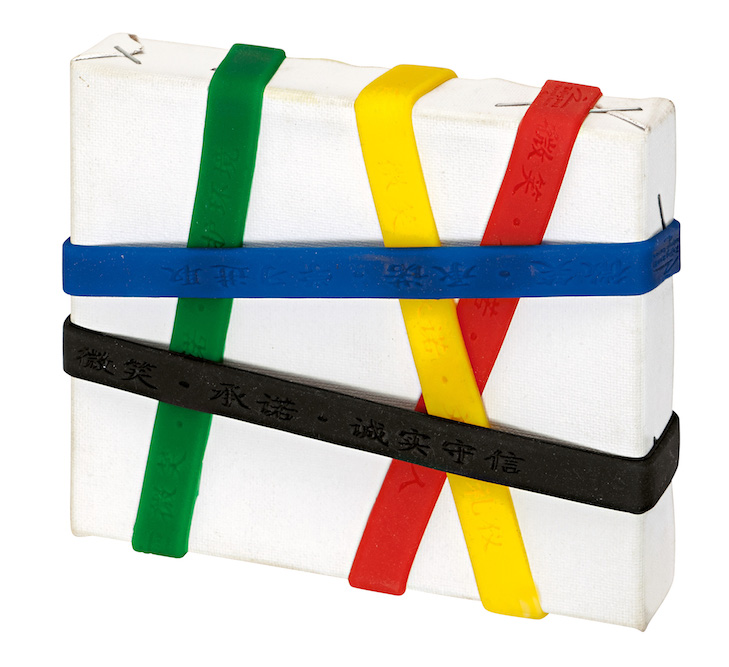 The possibility to talk to Luciano Benetton in person, and the chance to explore this complex collection and idea behind it on site was a promising prospect but also necessary in view of the sheer amount of information and artworks involved.

But first of all, how did the idea behind the Imago Mundi project start? It developed during the extended and constant travels of Luciano Benetton all over the world and can be seen as the product of his curious mind when it comes to different cultures, traditions and of course their artists. The Collection features established (you can also find a Christo or Bisky within this assembly of works) and emerging artists from countries and continents all over the world. There is only one restriction: Each work has to be an original and the format is always a 10×12 cm canvas. 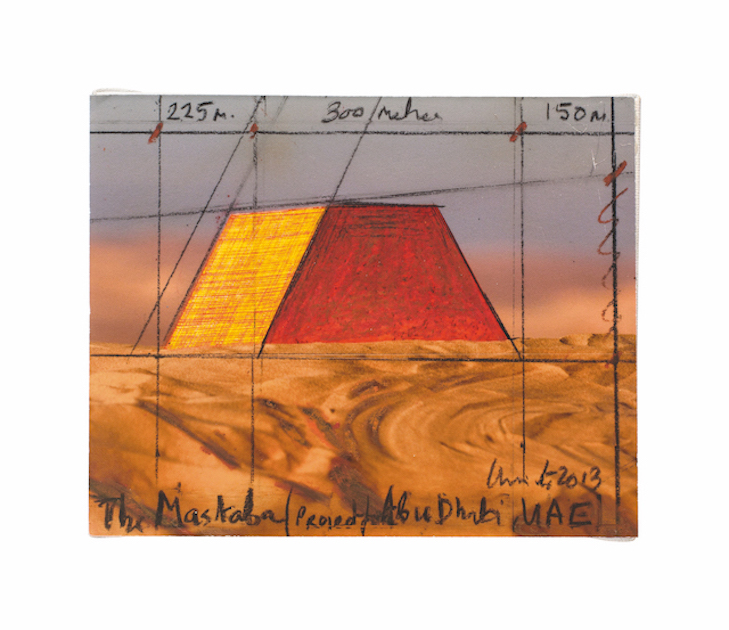 The latest iteration – „JOIN THE DOTS / UNIRE LE DISTANZE“ – had its opening in a large, breath-taking and spectacular location. Overlooking the sea, the former pescheria (fish market), now called Salone degli Incanti, is rightly so described as a splendid exhibition space, flooded with light and air, its high ceilings, and glass façade creating the perfect backdrop for the exhibition featuring over 6,300 artists, making it the largest in the Imago Mundi exhibition to date. The countries represented reflect the melting pot of cultures and countries that formed and influenced Trieste, and which still do till this day. 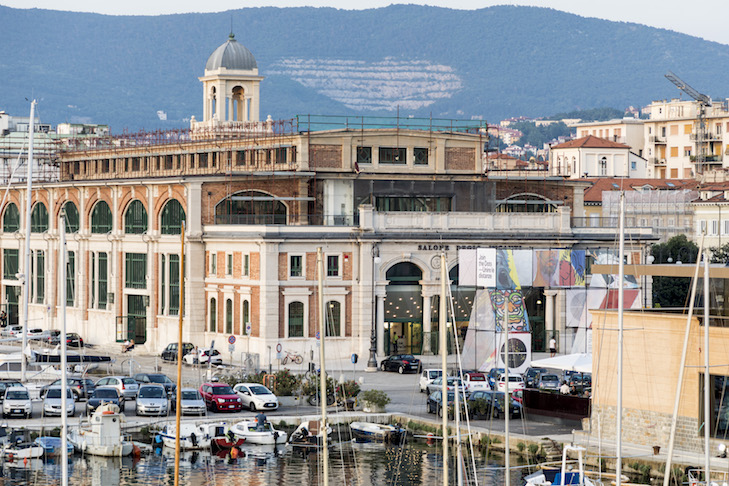 During the presentation of the exhibition for the press, we gained a first impression of the works on display, each country clustered with its featured artists on book-shaped walls, allowing the viewer to focus on the various titles such as “Slovakia: A Look from the Bridge“, „Belgium: Barbarians and Poets“, „Germany mon Amour!“. Wooden transport crates, each branded with the name and titles of the respective collection, were scattered at irregular intervals around the walls, forming a sort of conceptual and physical frame for the myriads of works. The exhibition was arranged in a narrative that made it possible to wander around and take in the works without being forced to follow a set route. 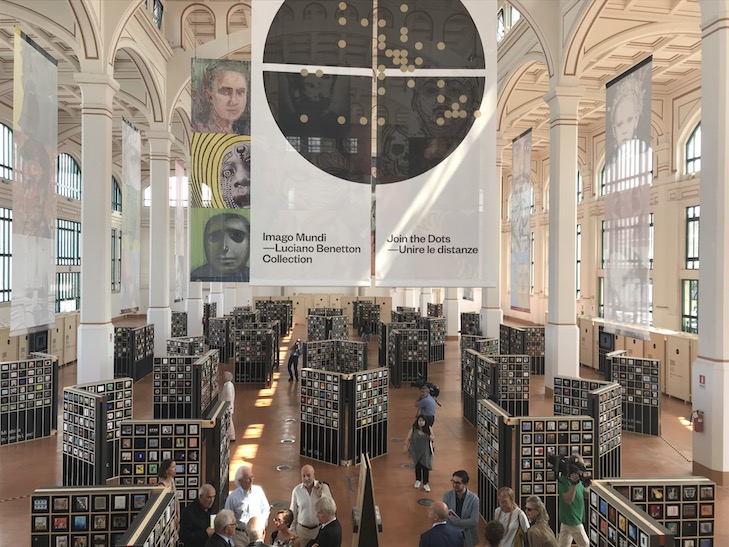 The overall atmosphere during the press conference was relaxed and well, very Italian. It was an important affair, with the mayor of Trieste present and of course Luciano Benetton attending. An interesting detail pointed out by the mayor at the end was that they both started their careers as shop boys. 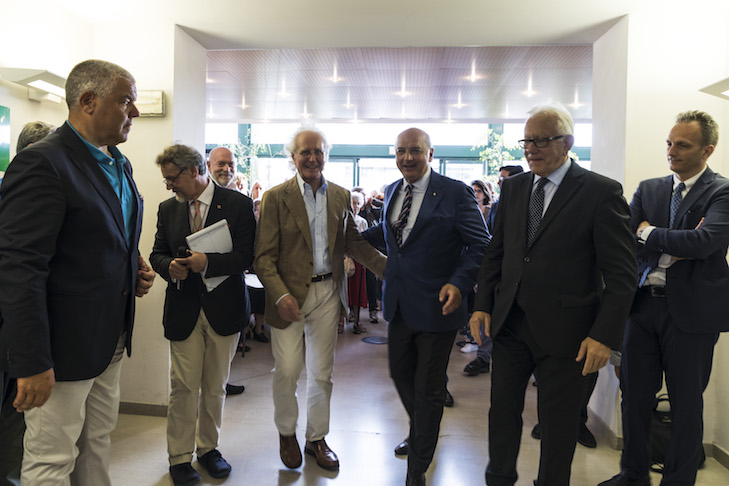 Mr. Luciano Benetton 3rd from left, next to him Mayor of Trieste Roberto Dipiazza at the Opening „Join the dots / Unire le Distanze“

Luciano Benetton tall, relaxed and impeccably dressed, with piercing blue eyes that give an idea of his vivid and curious mind, had a few days previously been awarded an Honorary Degree of Doctor of Fine Arts by New York’s Fashion Institute of Technology.

When I ask him what attracts him in an artwork, he answers:

First of all it is about the colour; colour has a message to me. Colour has given me a also a great deal of professional contributions. At the beginning of my career, I fell in love with Kandinsky and Klee because of the colours they used.

Even more beautiful was the way Kandinsky matched colours; a genius! 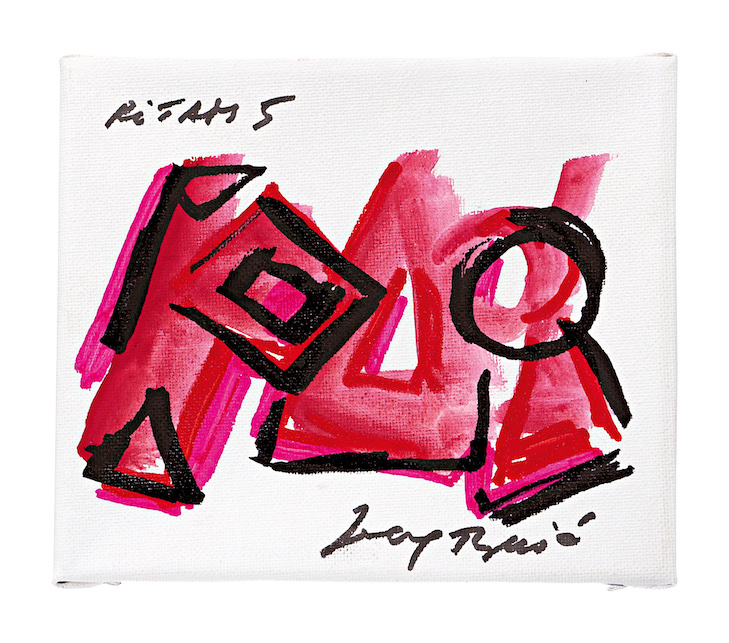 And what about Berlin, are there any plans to show a part of the collection in the German capital?

„When it comes to Berlin and I am thinking about it, the theme and issue is specifically important. The issue of the Kurds, for instance, people with no country, scattered over four different countries. At Imago Mundi we have put them together in a collection. It needs a venue that is suitable enough for this matter. It has to be a very open, very international venue. And with a mind-set that has to testify the openness of the project.“ 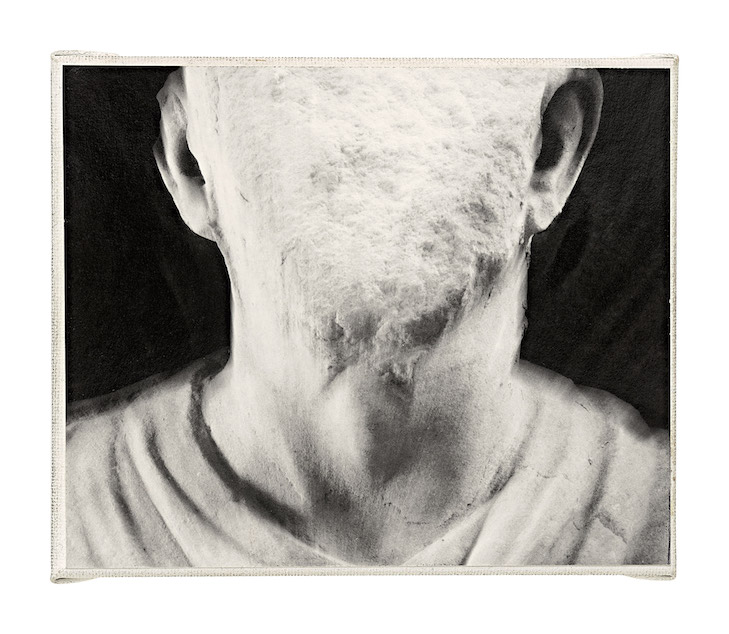 The fact that he addresses the Kurdish “nation“ in this context is an interesting choice when it comes to the art world it seems, but it also shows his susceptibility and awareness of the impact that a show like this could have on a city like Berlin. What was especially noticeable on the side-lines – apart from the down-to-earth and focused attitude of the young international team organising and curating the show – Nicolas Vamvouklis, Alexandra Etienne, Suzanna Petot and Mattia Solari -was the admiration for Luciano Benetton among the people who work for him. 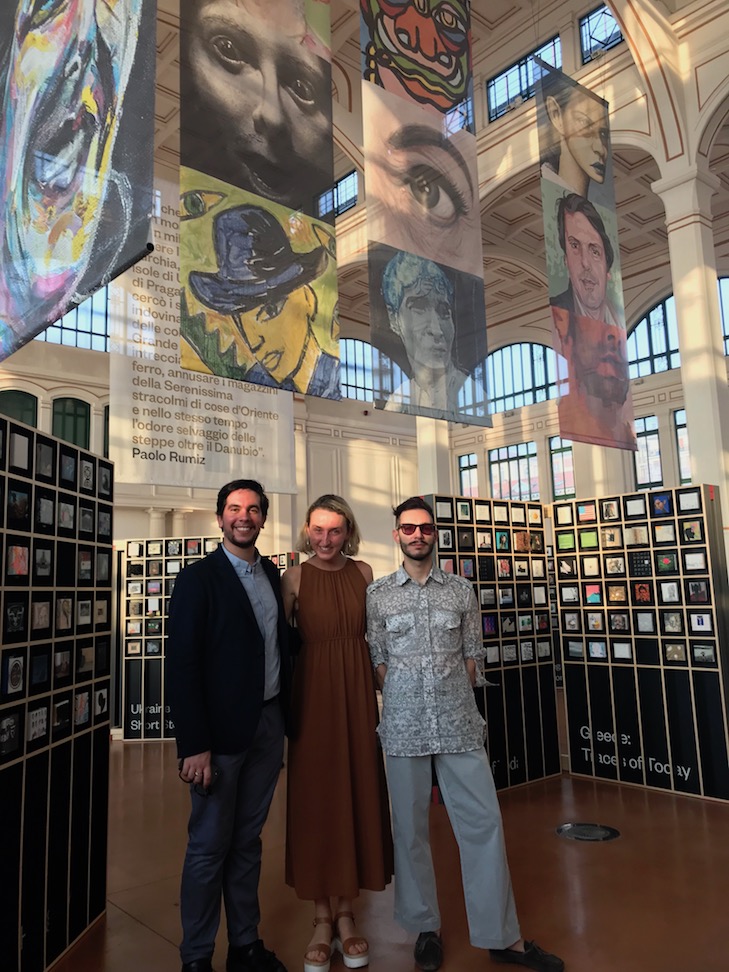 „I am particularly excited to supervise a team of talented, emerging international curators (in general, both the creative and managerial team of Imago Mundi is relatively young). Mr. Luciano Benetton has always been a supporter of young creative individuals promoting social change and we are grateful for this opportunity. Gallerie delle Prigioni is a platform for experimentation that cultivates awareness of contemporary art. I am convinced that this groundbreaking initiative will bring up new insights into the qualities of art practices today.“ 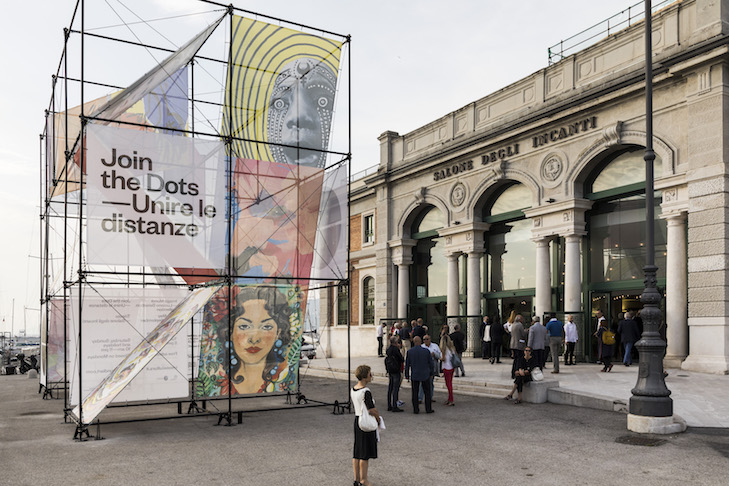 Or take for example the translator who has been travelling with Luciano Benetton since the 80s, a perfect Italian gentleman and intellectual who is a treasure cove when it comes to the history of the city of Trieste, the Imago Mundi Collection and Luciano Benetton himself. We talk about how leaving the comfort zone is a reoccurring and vital element in Benetton’s history. He tells me about the time when Benetton shocked the world with his iconic and game-changing adverts for the Benetton brand, facing an epic backlash especially in America. And consider the young curators of the „Join the Dots“ exhibition, who in addition to exuding responsibility also emanate a sense of freedom in working the Collection. There is a lot of respect, paired with a very free approach, refreshingly unpretentious but always focused. 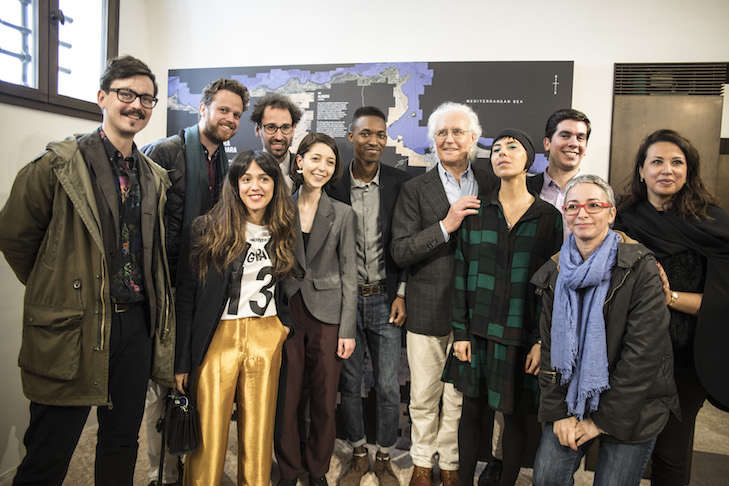 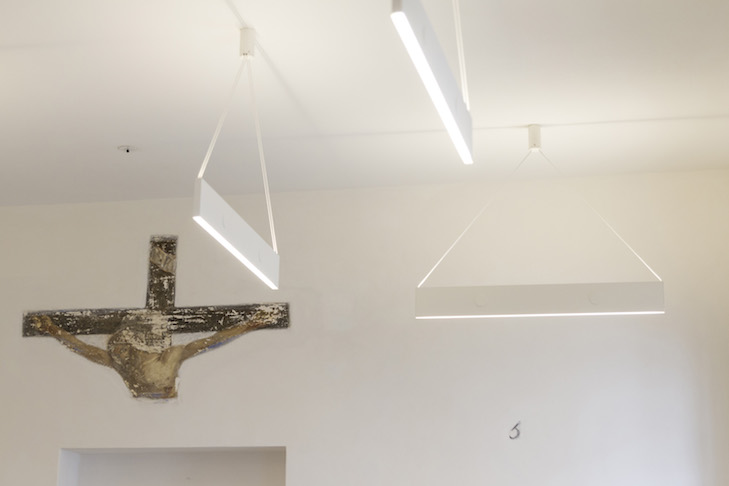 At the Luciano Benetton Collection

We want to learn more about the origins of the collection and on our way home the next day in the company of Imago Mundi curator Nicolas Vamvouklis, we travel to the beautiful city of Treviso. With its old city walls and lush Italian villas and vegetation, it is known for its elegance. As Vamvouklis tells me, the Fondazione Benetton Studi Ricerche, created in 1987 upon the wishes of the Benetton family, stands as testimony to their link with the Veneto region and the area of Treviso, in particular – contributing to the civil and cultural growth of the community. 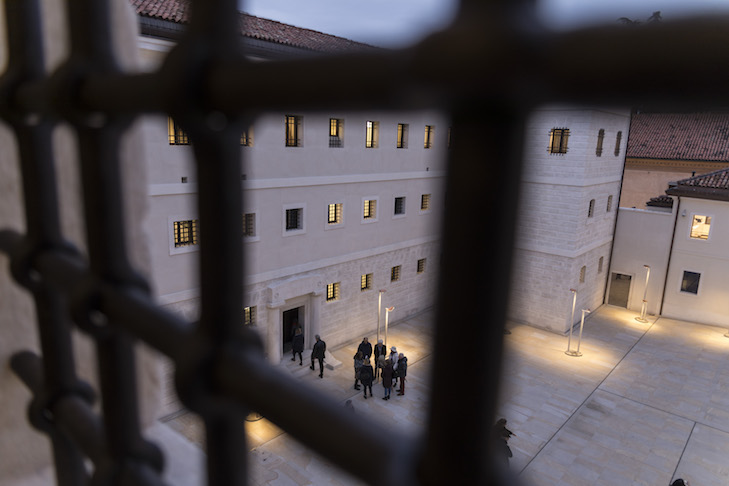 View of the courtyard from the prisons

The Imago Mundi Collection has its home in the city’s former jail. Squeezed in between a canal and the former court of justice in the core of the charming old part of the city, just around the corner of “the“ original and first Benetton store“, the building today holds the offices, parts of the collection, and also the newly opened Gallerie delle Prigioni. 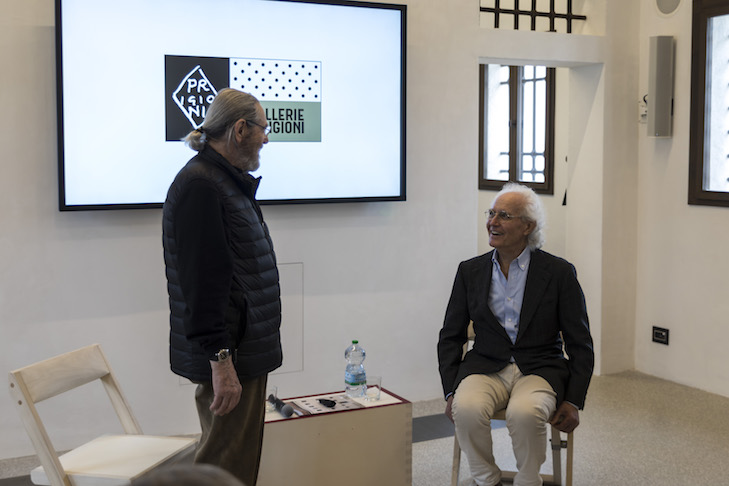 Architect Tobia Scarpa has transformed the 19th-century jail into an art space that stays in your head for a while. The thick stone walls, all painted in white, highlight the old, wooden jail doors, the locks and some of the historic frescos that had been saved thanks to „Scarpa’s restrained restoration and forward-looking restauration work“.

It is a unique building, for a unique collection. 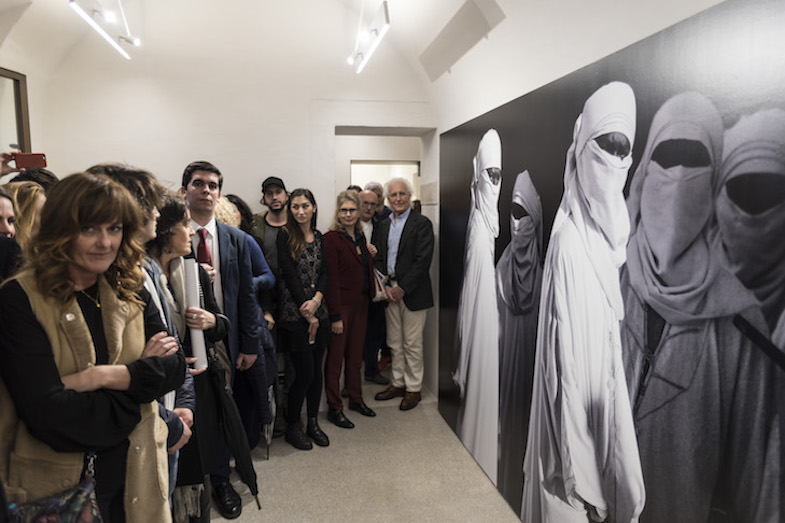 Opening, Sahara: What is written will remain | Words of Revolution | Takwa Barnosa

„Gallerie delle Prigioni in Treviso is a new space dedicated to contemporary culture. The general idea here is to explore these numerous narratives and re-interpret the Imago Mundi Collection not only geographically but also thematically. It is a really exciting moment, as we build up new relationships starting from a massive artistic network and develop exhibitions, research projects and educational programs.“ 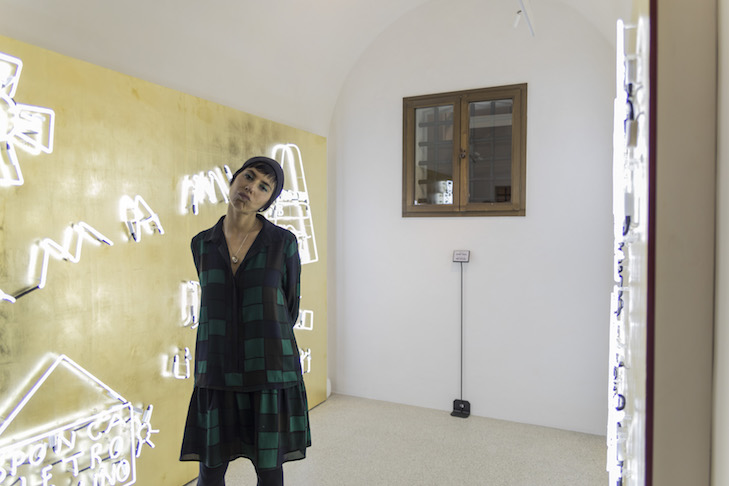 Opening, Sahara: What is written will remain | Esmeralda Kosmatopoulos

The visit to Gallerie delle Prigioni with its inaugurative show „Sahara: What is written will remain“ that opened in April rounds of the idea of the Imago Mundi Collection in an effect that can be best described as a magnifier lens. 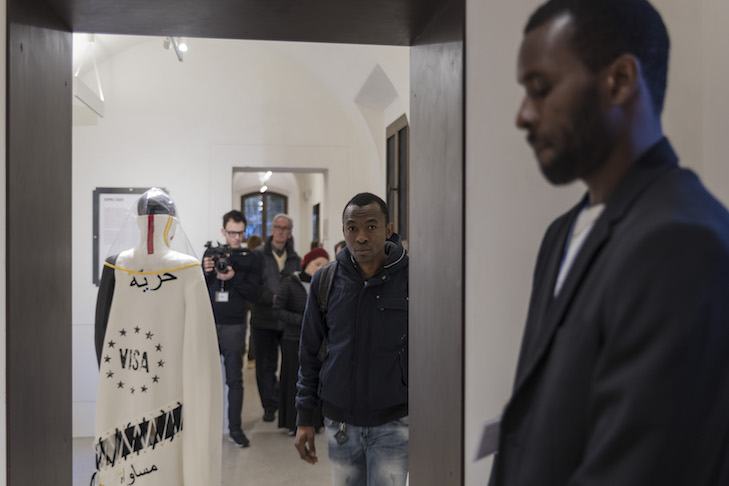 Opening, Sahara: What is written will remain | Yalla | Samia Ziadi

The four countries picked out by the curational team and presented in this group show consist of Algeria, Libya, Mali and Niger, the countries inhabited by the nomadic Touareg people of the Sahara Desert. Their narrative and language is the examined focus of this show. The artists and their installations we experience in this exquisite group show and setting highlight the intellectual, political and visual impact that this collection holds. 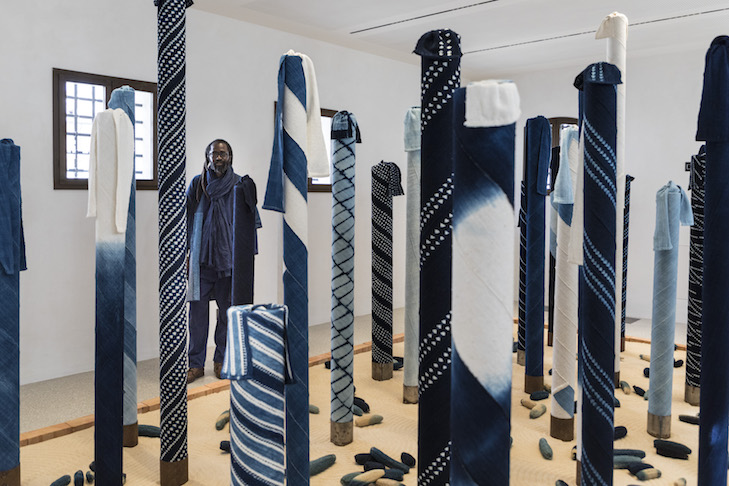 Opening, Sahara: What is written will remain | Aboubakar Fofana

Treviso, which can be easily reached by plane from Berlin, also marks an ideal starting point and place to stay if you want to explore the Veneto region and follow the traces of the “Benetton Art Trail” and Legacy, with the grand diva Venice to one side and Trieste, the city Joyce loved, to the other.

The “Join the Dots“ show at the Salone degli Incanti in Trieste can be visited until September 2, complete with a series of events, meetings and talks, so vai avanti!

Header Photo: Words of Revolution | Takwa Barnosa | Performance at the Opening | Sahara: What is written will remain