JOSÉ MANUEL CIRIA – how to handle the movie of your life

Famous painter José Manuel Ciria shares how to cope with popularity, what got him back into abstract painting, his feelings about being filmed and his latest works. 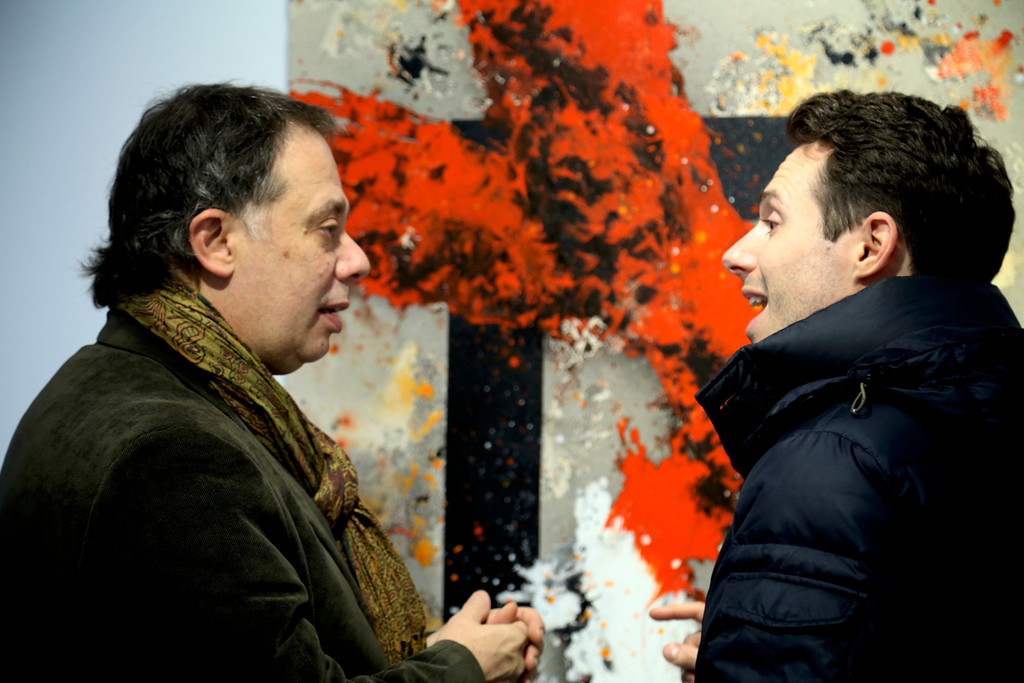 He is known as one of THE painters of this century. His name is José Manuel Ciria and we got to know him when he was bringing the well done documentary CIRIA PRONOUNCED THIRIA to Berlin’s Martin-Gropius-Bau followed by the opening of his latest exhibition at Galerie Kornfeld. His works speak abstract in their form but do go deep into your tissue. There is a reason for it: José Manuel Ciria is a very honest man and we were pretty surprised listening to his very personal answers in our interview. Beautiful if you stay open like this despite an immense popularity you are experiencing. Jump with us in a conversation about life changing experiences, his return to abstract painting and feelings about being the main character in the movie about your life.

A CONVERSATION WITH JOSÉ MANUEL CIRIA

José, may I ask you  how you’re doing?

I’m feeling great and I’m looking forward to the future. A year and a half ago I had to close down my New York studio in a rather traumatic way for family reasons, but now I’ve moved to London and, after a lot of work, I’ve found a fantastic studio. I think the work that’ll start coming out of the London studio will be worth it.

What are you working on right now?

On one hand, I’m still investigating my theoretical platforms. I’ve developed a third path of conceptual investigation for my work. And I’m reworking what appeared in the earlier platform for generating “matrix” for configuring abstract images. There’s a fair amount of worrying and impatience about the work that’s going to come.

But, on the other hand, I’m really enjoying this moment of experimentation.

LETS TALK ABOUT YOUR MOVIE

Your documentary CIRIA PRONOUNCED THIRIA was shown at the MOMA in NYC and lately at Martin-Gropius-Bau. What triggered you to do it?

I’ve got conflicting feelings about the documentary. The shoot was really tough and extremely long.

It took more than a year and a half. The person behind it all was the director Artur Balder. He came out of the world of painting and had been interested in my work for a number of years. When we met in New York the project just came up immediately. I’m really satisfied with being able to show the film at the MoMA in New York and the Martin-Gropius-Bau in Berlin, but I can’t help feeling that the documentary doesn’t show the development of my work in real depth and it focuses too much on personal issues, especially losing my father. A lot of friends have told me the film doesn’t show my real personality.

Being filmed and then watching yourself in the movie – how did it make you feel about yourself?

It’s always interesting to see the way other people see you.

Seeing yourself in a 90 minute documentary is a little disturbing because it’s like looking straight into a mirror as if you were naked. There’s another project now for a second similar documentary and I’m terrified, but not because there aren’t a lot of things to say, rather because it’s really hard work and takes up a lot of time. 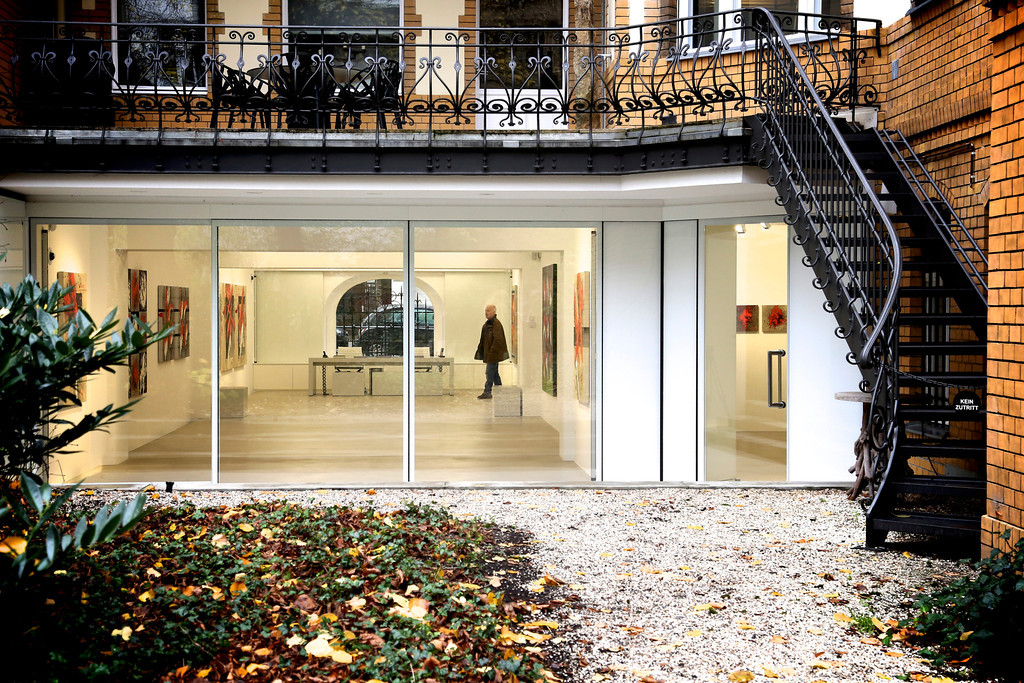 YOUR EXHIBITION AT GALERIE KORNFELD

In your own words and for non-art historians, what is the pictorial spot the visual construction is built up on?

I think of myself as a researcher of abstraction. I’m not satisfied with a linear evolution of my work.

To answer your question, and to give a graphic explanation, I might compare creating a work of art with making food. Of course, what the patron of a restaurant wants is a good plate of pasta with a nice presentation and that’s appetizing and has a flavor that satisfies the palate. However, aside from that kind of rudimentary cooking, there is a kind of culinary research that chefs like Ferrán Adriá and his followers do. I’d say my interest lies in having all the conceptual territories that make up a fully developed work of art  at my disposal, and at the same time offer the viewer a painting that stays fresh, burns their retinas and makes them think, but also agrees with the stomach. I’m interested in both worlds.

What made you return to abstract painting?

Since 1990, when I made the leap into abstraction, I’ve always considered myself an abstract painter. But that doesn’t mean I can’t make a few incursions into figuration.

Abstraction and figuration are the same thing for me. What’s interesting is that I like it that my surroundings have a radical impact on my work.

If it can be said that Picasso’s work mutated and transformed when he changed partners and had the intense anticipation that a new beginning brings with it. Along those lines, I think my work can be easily divided, not just into series that I create, but into the place where each was made. My abstract work from 1990 to 2005 was completely transformed when I got to New York. Seen with some distance, my entire 7 year New York period, was formulated around a distinct return to line, structure, drawing… which are elements that weren’t there in the investigations in my Madrid studio.
When I went back to Madrid in 2012, the surprising thing was that I went back to making the work I’d abandoned in 2005.

Right now, it’s still up in the air what might be expected from my London period, although I’ve got a lot of clues about where the work is going to go. 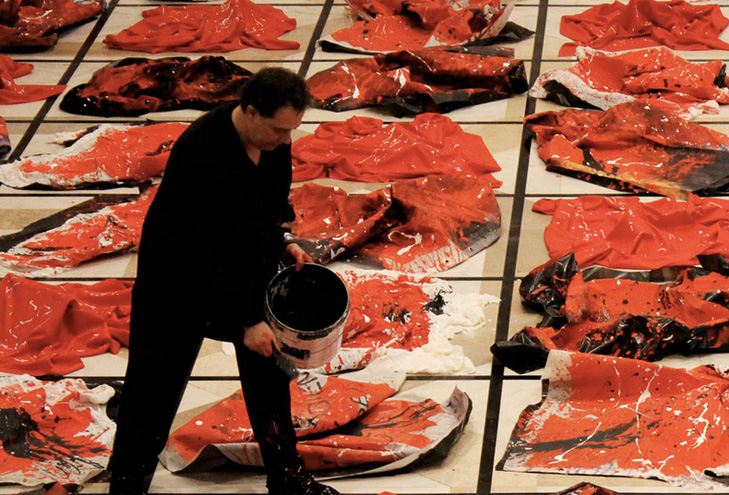 In the press release it says: your bodies of work arose in the context of your move from New York to Madrid and then London. Would you tell us a little bit about this as an inspiration for the three series you created.

The work in the show at the Kornfeld gallery is exactly the entire body of work that’s been produced this last year in Madrid. The idea was to go back to the original purity of the “Masks of the Glance” series and, after getting to that point, generate three completely differentiated blocks of work. The title of the show “Over/Under the Raw”, clearly shows that intention. I’d already worked on the “Psychopomps” series, but then the painting was done on top of billboards and advertising posters. With the technology available today any image can be printed on canvas. This entire “Psychopomps” section is the part called “under”, because the painting was done on top of preexisting images. The approach was to go back to the iconography of the “Masks of the Glance” and “Abstract Memory” series and de-contextualize it from its normal geometric ground. Another block is made up of the new paintings from the “Masks of the Glance” series, which are what are called “raw”. And there’s a third group which, building on that iconography, incorporates highly worked collages superimposed onto the picture plane. The last part is described as “over”.

Even though the idea is straightforward in terms of how it’s made, it leaves the work open to new experiments and generates really interesting intermediary interstices between the blocks.

I remember when I started painting in New York, I had the problem that when I went back to Madrid the work I was making in my studio there was a continuation of the previous work and wasn’t connected to what was going on in New York. That situation made me feel a little schizophrenic because what interested me was working on the new paintings and not looking back.

I finally managed to get both studios to meld into a single artistic intention. Right now, however, that same situation feels completely fine to me. In Madrid I continue with the premises of my “classic” abstract work , but I’m creating a whole new set of ideas and different ways of behaving in the work that appears in London.

How do you work / cope with your immense popularity? How do you keep finding the  place within yourself where your art comes from?

Popularity isn’t something artists never think about achieving, of course we need acceptance for our work.

But, the way things work is determined much more by the network of galleries and the market than by the thoughts and concerns artists have in their studios. I like to stay humble, and think that if I let myself get carried away by popularity I’ll stop having time for investigation and growth in my work. My mother always told me that if your head gets too big one day you won’t be able to stand up.

As far as creativity goes, when you dedicate yourself to artistic investigation, there is no blank canvas and the muses can only appear when you’re at work making a painting.

Thank you so much José.
Find out more about José Manuel Ciria on his webpage and latest works at the Galerie Kornfeld webpage.
Interview: Eva Kaczor