LEWIS & TAGGART – The essence of form

We meet the artist duo Lewis & Taggart at Künstlerhaus Bethanien. Read how they created their own museum, how they work together and where you can meet them in Berlin

We meet the artist duo at Künstlerhaus Bethanien

In 2010, Chloe Lewis and Andrew Taggart, known as the artist duo Lewis & Taggart, established the Museum of Longing and Failure (MOLAF) in Bergen, Norway, and have since presented it in Denmark, Poland, Canada, the USA, Greece, and Germany. The MOLAF is not a gallery, not a project space. No – it is something else, a museum of sorts, with a permanent collection of commissioned sculptures by over eighty international artists.

The MOLAF grew out of an impulse to open up a dialogue with other artists engaged in object-based practices. 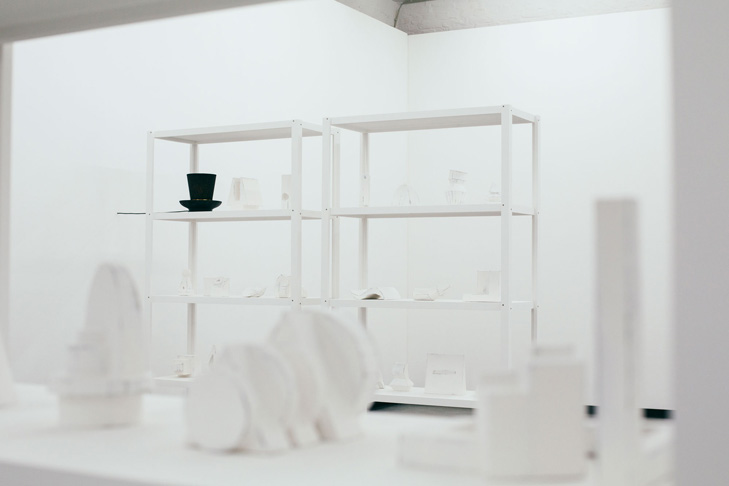 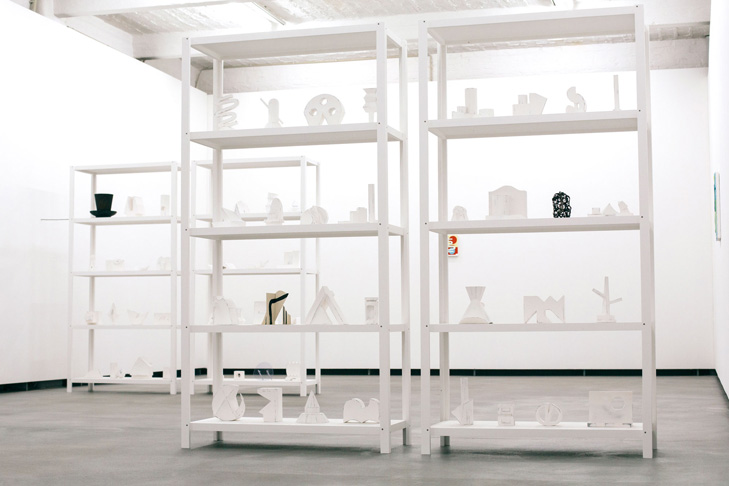 Until October 30th, Lewis & Taggart present The Museum of Longing and Failure: Installment No. 17 at Künstlerhaus Bethanien, where they are about to finish a twelve-month artist-in-residence program as the 2015/16 grantees of the Canada Council for the Arts.

We meet the duo in the exhibition space at Kottbuser Strasse 10, which is filled with small white sculptures arranged in rows on four shelves framed by colourful collages on the walls. Amidst the white forms are positioned the new acquisitions, created by guest artists Vanessa Brown, Ingrid Furre & Olof Nimar, Johanne Hestvold & Gaute Tenold Aase, and Jade Yumang.

For Installment No.17 we looked for a way to represent the MOLAF’s entire collection without having it in the physical exhibition space, which led to us developing this series of “MOLAF Approximations” – the plaster sculptures you see here. Each one points to an original work from the collection, but is not necessarily indexical or recognizable. We aimed to capture a certain quality, the essence of the form.

say the artists as we walk upstairs towards their studio, where they work and live during their Berlin residency. 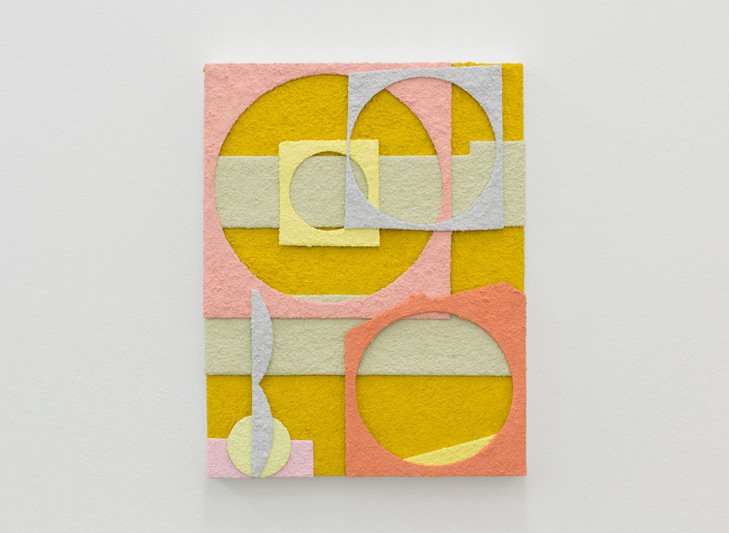 Their studio space is filled with drawings and sketches that build the creative base for the sculptures in the exhibition. Chloe and Andrew worked together on all of them, as they always do. In fact, they have worked collaboratively since first meeting ten years ago. What fascinates us is the fact that the two not only work together but also live together and treat each other with tremendous respect when it comes to sharing their practice in our interview.

Our collaboration is best described as a rolling conversation. Our work often is evolving over a long period of time – we make tiny adjustments together, building up the pieces step by step. 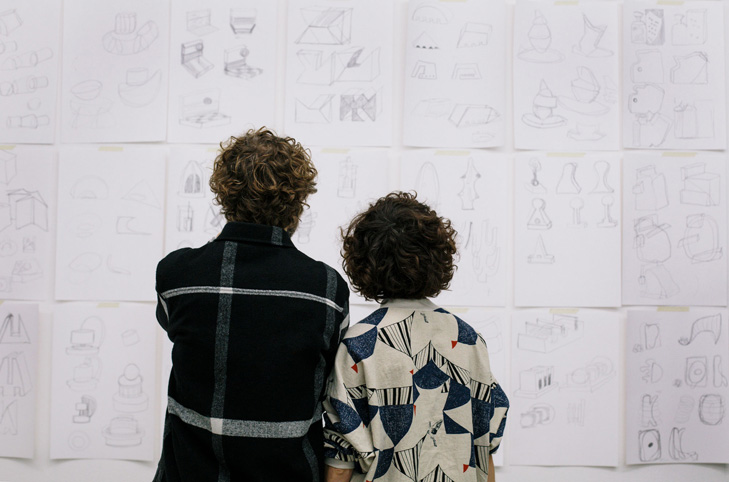 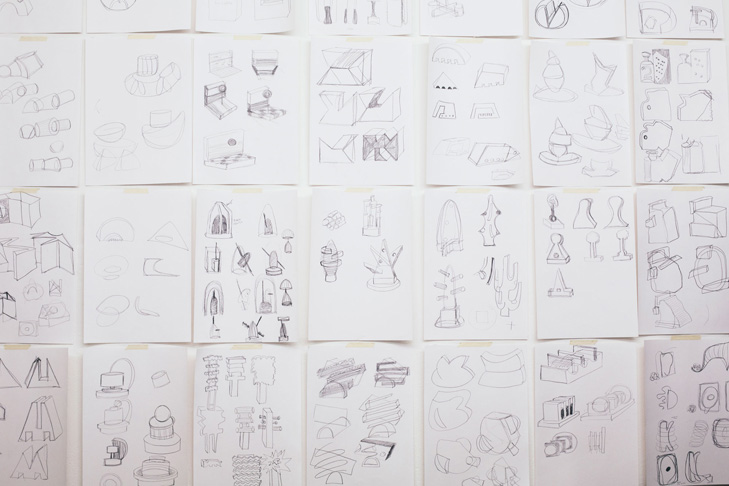 As we talk more about the way Lewis & Taggart perceive and create their work, the importance of chance encounters with physical material becomes clear. The collages in the exhibition are formed from the leftover material that was piling up in the studio as they worked on the MOLAF Approximations. To name the collages, Lewis & Taggart extracted single words from the titles of the original sculptures in the MOLAF’s collection, and then combined them together into alliterations: Afternoon Animal Appearances, Free Fold Future, Shrunken Spirit Structure, etc.

Right now, they have a work on view in Oslo made in part from their findings in Berlin. Composition for three and more triangles (Mouthpiece) is composed of found exhibition posters depicting a photograph of Pablo Picasso, a bamboo stick and metal wire collected in Peniche, Portugal, a jawbreaker candy shaped by the mouth of a stranger in Berlin, paper, spray paint, birch plywood, metal dowels and hardware. You find it as part of their ongoing series of site-specific works for the front entrance of Kunstnerforbundet in Oslo.

Reflection instead of constant production

Artists are often under a lot of pressure to produce quickly and work from deadline to deadline. Having twelve months here at Künstlerhaus Bethanien to reflect and take the time to ask ourselves questions was truly a gift.

If you missed the exhibition at Künstlerhaus Bethanien, there is thankfully another chance to meet Lewis & Taggart: From December 9th to 11th they will present the MOLAF’s eighteenth installment alongside a new publication during the Friends with Books art book fair at the stunning Hamburger Bahnhof museum. Crafting and publishing books is an integral part of their practice. 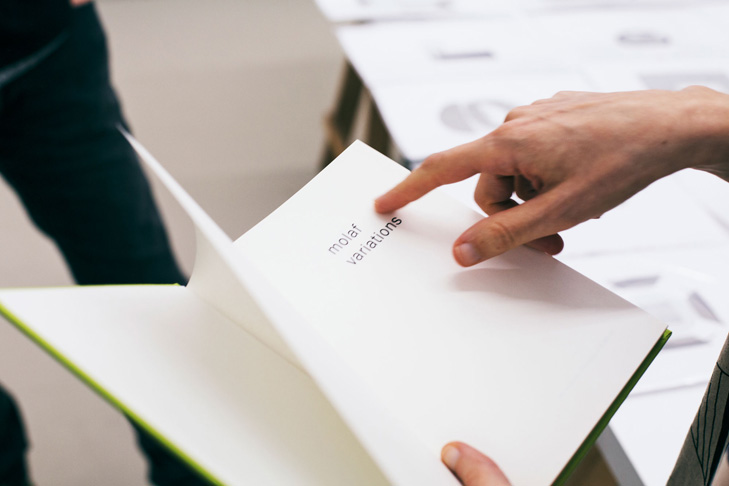 Lewis & Taggart (Chloe Lewis and Andrew Taggart) are Canadian artists based in Bergen, Norway. They hold BFA degrees from Emily Carr University of Art and Design, Vancouver, and Concordia University, Montreal, respectively, and received a joint MFA from the Bergen Academy of Art and Design, Norway in 2010. The​ir work has been ​presented at venues including The Drawing Centre, Oslo; Entrée, Bergen; Syntax, Lisbon; ISCP, New York City; The Centre for Contemporary Art, Warsaw; and Kunstverein Leipzig, Germany.