With a visit to Museumsinsel Berlin you get four of Berlin’s top museums in one place: Pergamon Museum, Bode Museum, Neues Museum and Alte Nationalgalerie.

How Museumsinsel was created

Housing Berlins most prestigious state museums such as Altes Museum, Bode Museum, Alte Nationalgalerie and the famous Pergamon Museum, Museumsinsel is actually the north end of a small piece of land in the Spree river in Berlin Mitte. Around 800 it was the historical starting point of the city of Berlin, the point from which the city grew to become Germany’s capital. As the political centre of the Prussian State, the southern half of Museumsinsel host institutional and representational buildings such as Berliner Dom (church), Stadtschloss (crown), Marschstall (military) and Lustgarten.

The shift of political power towards the Bourgeoisie following the French Revolution, also led to a shift in the access to art which until then was kept in privat collections. Now it was made accessible to the public and their aesthetically and culturally education. This was the time when museums were created.

Although the Prussian monarchy was not subject to the same crushing revolution, that sparked the first public collections in France and Kassel, Berlin soon followed suit in building museums – the new bourgeoisie institution. And where better to erect the first temple for the arts than in the very heart of Berlin. That was the beginning of Museumsinsel. Let’s explore which museums you will find here today: 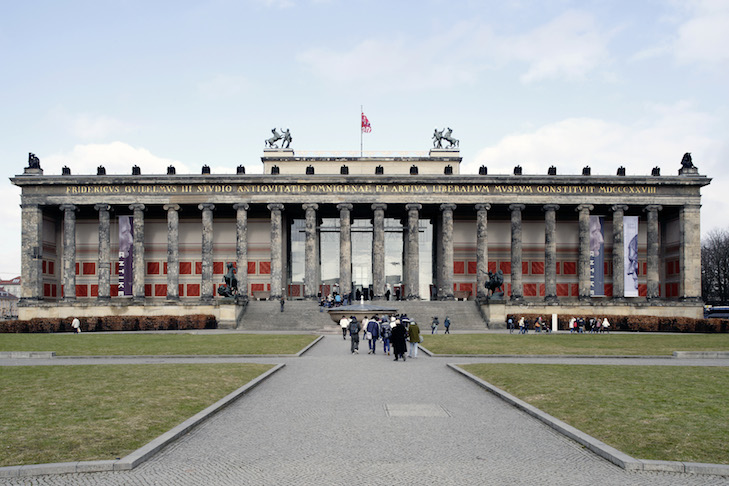 The Old Museum was the first to be built on the Museum Island in 1830 according to plans by Prussian star architect Friedrich Schinkel. It was originally conceived with support from another of Germany’s venerated all-time favourites, Wilhelm von Humboldt, founder of the nearby University to make the royal Prussian collection open to his students and the general public. In true neoclassical style, the buildings front facade faces the city with an impressive staircase flanked by a colonnade of pillars, which are crowned by a tympanum displaying figures from mythology. Modeled on the classical greek and roman temples, the architecture symbolically marks the museum as a temple for the arts, a place everyone is welcome to seek beauty and reflection. Inside the museum the Rotunda, inspired by the Pantheon in Rome, spans all floors and opens up to the sky. Berlin’s collection of antique statues are put on show here.

Since then the Old Museum stays true to its name, showing and safekeeping the Antikensammlung/Collection of Classical Antiquities. Highlights of these treasures are the fragments of Etruscan architecture and pottery, or the famous statue known as the “Praying Boy” dated to 300 BC. If you can, catch a guided tour of the collection, the history of where, when and under what obscure circumstances the pieces were obtained, is a story not to miss! 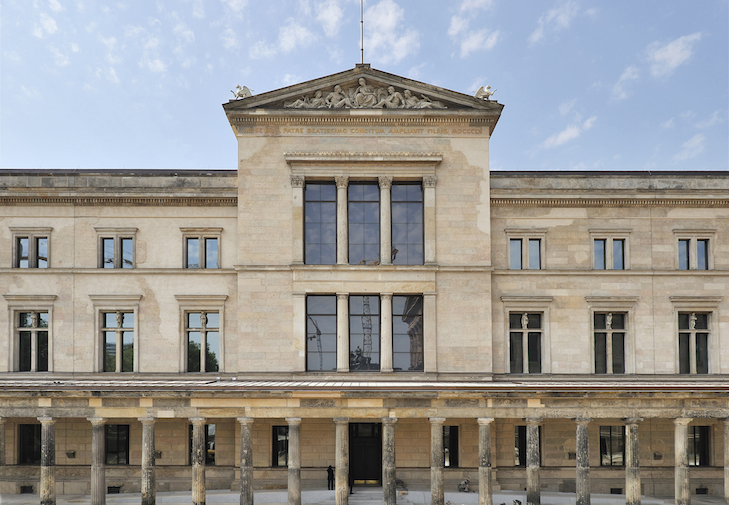 A few years after the first museum opened on Museum Island, the ensemble grew further with the addition of Neues Museum. It was designed by Friedrich August Stüler, the most famous of Schinkel’s Students, who was also responsible for the buildings housing the Sammlung Scharf-Gerstenberg and the Museum Berggruen, opposite the Schloss Charlottenburg. Sadly destroyed during the bombing of Berlin in the Second World War, it was painstakingly restored by another Star architect David Chipperfield and reopened in 2009.

The exhibition building unites three separate museums: the Egyptian Museum and Papyrus collection, the Museum of Prehistory with more pieces from the Collection of Classical Antiquities and the collection of the New Museum itself. Together this permanent exhibit connects art works which are thematically, geographically and temporally related and enables a unique insight into the very beginnings oft art history.

If you want to dig deeper into what you will see in the museum, just fload into our museum profile about Neues Museum. 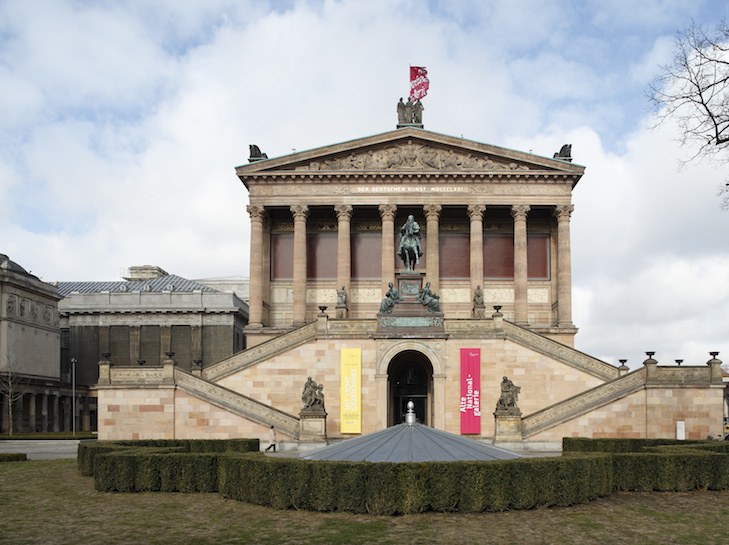 Alte Nationalgalerie (Old National Gallery) continues the narrative begun by Old and New Museum, displaying art from 18th century onwards. Germany’s most famous romantic and neoclassical painters, such as Caspar David Friedrich, Schinkel, or Menzel, are represented with masterpieces of their works, but the National Gallery also collected groundbreaking works by french impressionists and works from early pioneers of Modernism. Highlights of the collection are Caspar David Friedrichs “Mönch am Meer”,  Adolph Menzel’s “Eisenwalzwerk” and Johann Gottfried Schadow’s “Prinzessinnengruppe”, a double statue of princesses Louise of Mecklenburg-Strelitz and Frederica of Prussia.

Architecturally the Old National Gallery also keeps in line with its predecessors on the Museum Island, as it is based on the model of a classical roman temple with a generous staircase, mixing late Classicism and Neo-renaissance styles. Visitors can enjoy the architecture and outstanding sculptural works from outside the Old National Gallery in the so called Kollonadenhof. This roofed courtyard provides a quiet place to stroll between statues and beautifully arranged rosebeds. 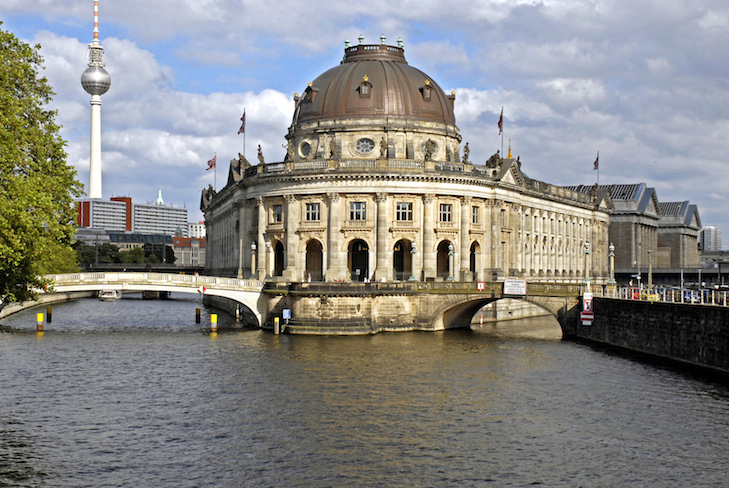 As the german empire not only collected german art but also organized extensive archeological excavation trips to Egypt and the Middle East, the Bode Museum soon joined the museum ensemble to exhibit the so retrieved sculptures. Half a century after it was first opened in 1904, it was renamed after Wilhelm Bode, the museums first curator. His conceptual approach was related closely to the romantic ideal of the Gesamtkunstwerk, which questioned the separation of the arts into techniques, such as painting and sculpture, or categories, such as music, visual art, theatre and so forth. In his mind artworks of a particular time period and style should be displayed together to create an in-depth notion of the differences and similarities between countries and artistic disciplines.

In remembrance to its name-giving curator, Bode Museum still exhibits its collection of christian Egyptian (coptic) sculptures and Byzantine art, complementing it with art made simultaneously in northern Europe during the gothic period.

Pergamon Museum – and his famous altar 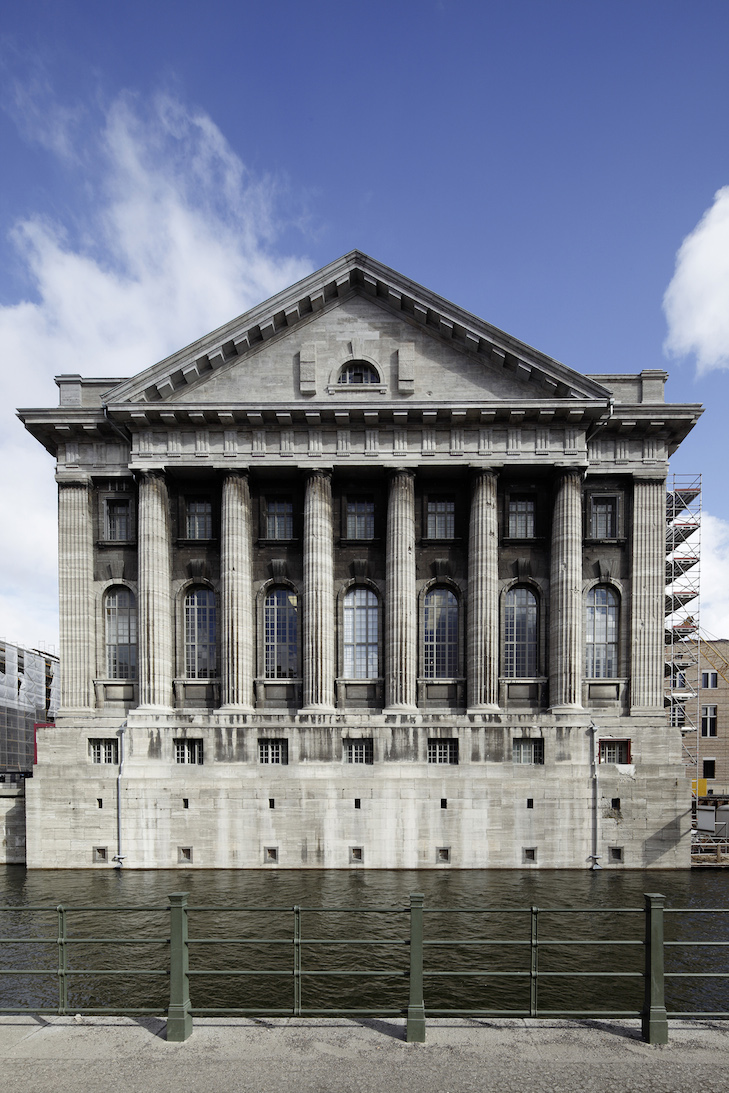 Soon after Bode Museum opened, it became clear that it could not host all of the treasures being excavated in Babylon, the Middle East and Egypt. The Pergamon Museum was designed to hold huge room filling fragments of ancient architecture, gothic art and islamic and middle eastern art. It unites pieces from the Collection of Antiquities, the Middle East Museum and the Museum of Islamic Art, highlights of which are the gigantic Pergamon Altar, the Ishtar Gate with its shimmering blue mosaic decorations and the Aleppo room.

Having only been open for around 15 years, the Pergamon Museum was severely damaged in the Second World War and currently is being subjected to another round of restoration. It will be reopened in 2019. Until then visitors can enjoy the virtual tour of the museum.

All Museums of Museumsinsel that belong to Stiftung Preussischer Kulturbesitz open
Tuesday - Sunday: 10am - 6pm
Thursdays: 10am - 8pm
Mondays: closed