The Lithuanian artist Andrius Zakarauskas always dreamt of being an artist, a painter to be precise. He was a mere 24, when his gallery told him it would be showing his paintings next to works by A.R. Penck. Needless to say, Andrius was very happy about this opportunity. In fact he felt so confident as an artist in general, so mature, that he told Penck exactly that when they met. Penck answered straight out that he felt the same when he was that age. That was 2007. We met him before the opening of his solo show – titled WALLSCAPE – at Magic Beans Gallery and talked to him about his coming of age as an artist in the country of Lithuania. 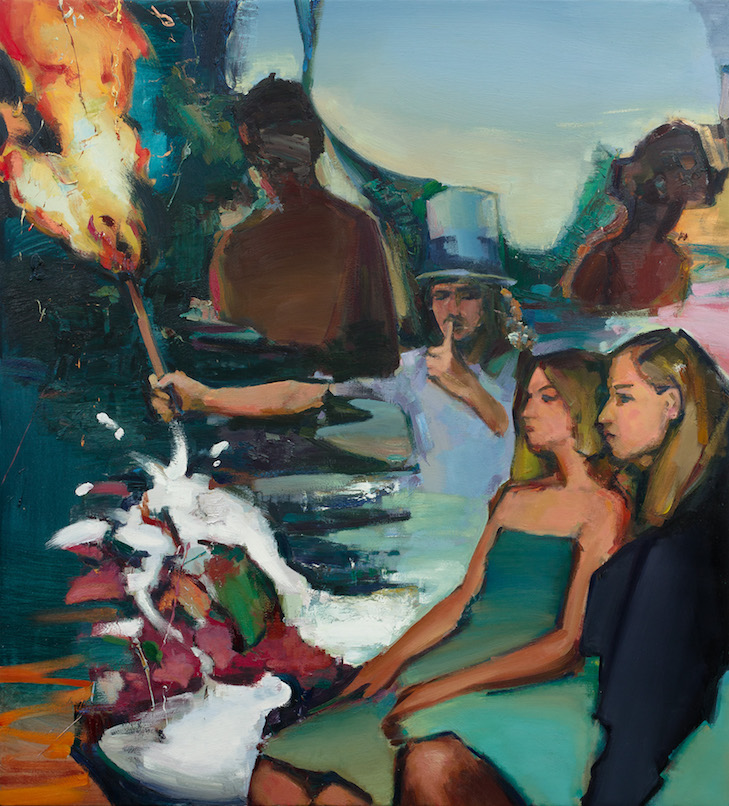 Please tell us a bit about how did it begun and what made you decide to become an artist.

I have always dreamt of being an artist, of being a painter to be precise. For me the painter itself has his own way of thinking and seeing – and it’s always about seeing light through forms and ideas. When I was a child, my mother took me to art school in order for me to be occupied and to broaden my mind. I liked it so much that when I finished school and my exams, I had no other option than to go straight to the Art Academy in Vilnius. I was sure I would get in. For me to be a painter was always the best thing to be, the most fascinating thing to do. While studying I already lived quite an active art life and met a lot of interesting people. 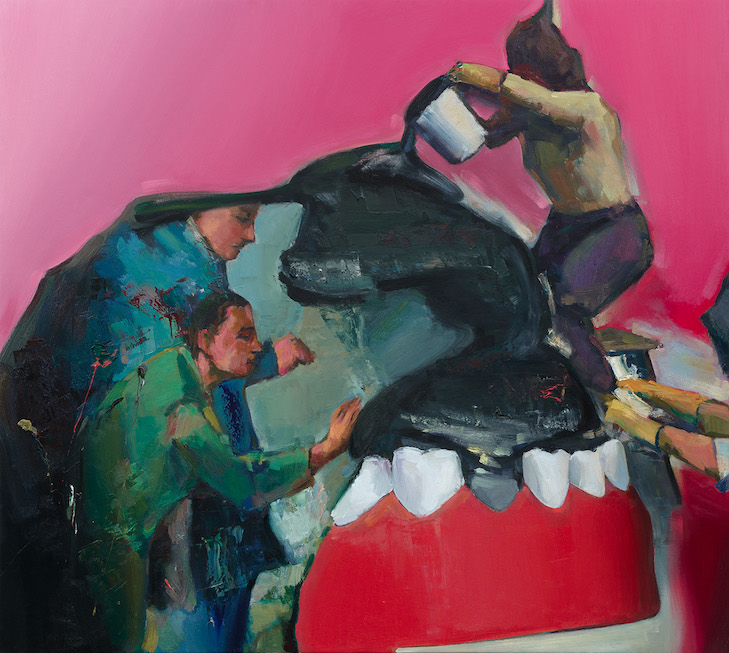 So, the painting idea became even more important after I finished my Master’s studies. All these questions: What is painting? What can a brushstroke do? Is it real or is it just another world made by oil paint? How to create the image? It all became my part of life. It would be very difficult for me to do something else. I would say that I’m becoming more and more a painter every day, with every new work. I always want to go further; I always ask myself what comes afterwards, how can I tell the viewer more. 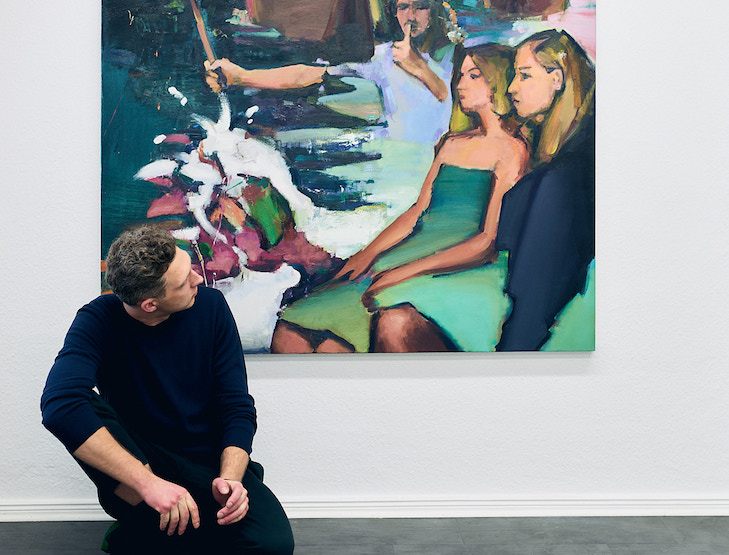 It comes as no surprise that when we asked Jonas Gasiūnas, professor of painting at Vilnius Academy of Arts, about his student Andrius Zakarauskas, he remembers him as independent, separate from official school trends, as someone who searched a lot by himself, and drew his own conclusions. He still belonged to that elder generation for whom at first it was not easy to get onto Erasmus programs or international symposiums. This limited the possibility to learn directly from teachers and colleagues in Western Europe. So in the beginning Andrius Zakarauskas constructed his style of painting mostly by himself.  According to the professor, you could feel multiple influences in his work – most importantly from the Polish painter Wilhelm Sasnal, The traditional modernistic painting of the Soviet realism Period could also be seen to a certain extent in the way he constructed drawing. Even older, deeper roots, such as traditional Lithuanian painting and the Lithuanian „Ars“ group of the 1930s, were noticeable in the way he used colour.

I can’t help feeling a little paranoid while walking through the exhibition. There is a certain tension in his works, like something is going to happen, but we don’t know what. But there is also the presence of the painter himself in every painting, like coexisting next to his ensembles through each brushstroke.
And this is of course exactly what Andrius wants from us. To sense the ongoing trialogues.

I always want people to question themselves, to make them think. It is way more interesting then to give all the answers.

Is it a portrait of the painter, is it a man or woman in the painting – the question is more important than the answer. I would call that like daily life scenes which are happening in the painting world. The parallels can be found with the life we live in. I always try to create a feeling of concern in my work.

So “free love” exists, but only for a moment. 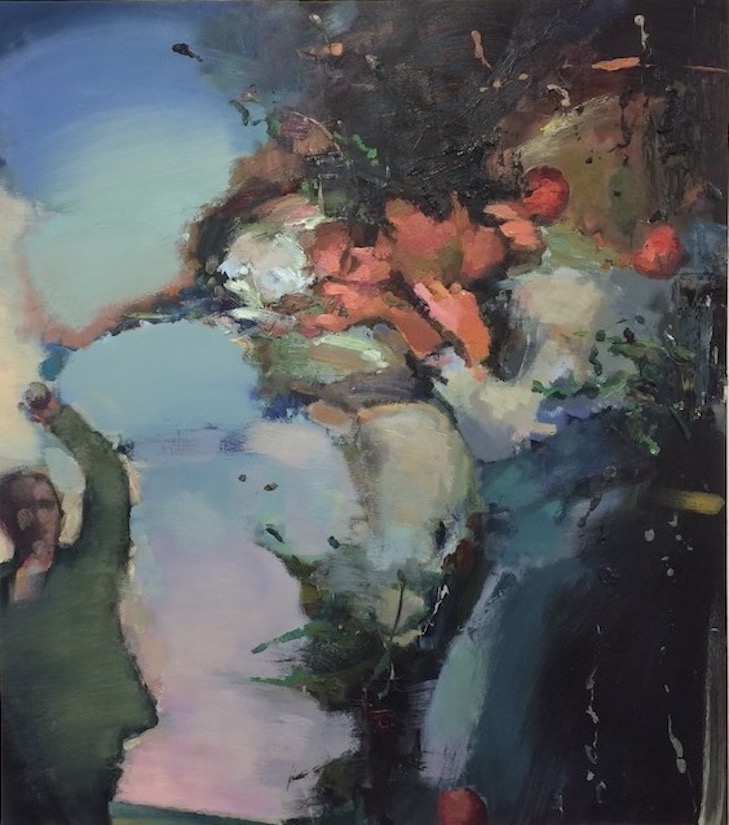 It is this need to get answers to the questions cascading in my head like dominoes when I stand in front of works like „Samson and Delilah“, in which the protagonists are kissing, practically converging in their doomed embrace, unaware of a person – Jesus? – waving at them from the corner.

Who is this mysterious person in the corner? What does he want? Is he warning Samson and Delilah, or is he waving at ME, the observer?

And then, immediately after, when we turn to a work like the „Baptising Brushstroke“, are we witnessing Andrius himself, or John the Baptist, emptying a bucket of paint over Jesus maybe, or the person to be baptised?

Let that idea and that sight sink in for a moment..

In „Judgment Day “, a work in which we can find a reference to Wilhelm Sasnal´s painting “Airplanes” from 2001, i can feel the vibration and nervous energy in the air, it makes me shiver with pleasure, while simultaneously the pink sky nearly makes me forget the danger, even if it´s plainly obvious.

What the hell is going on in this work? 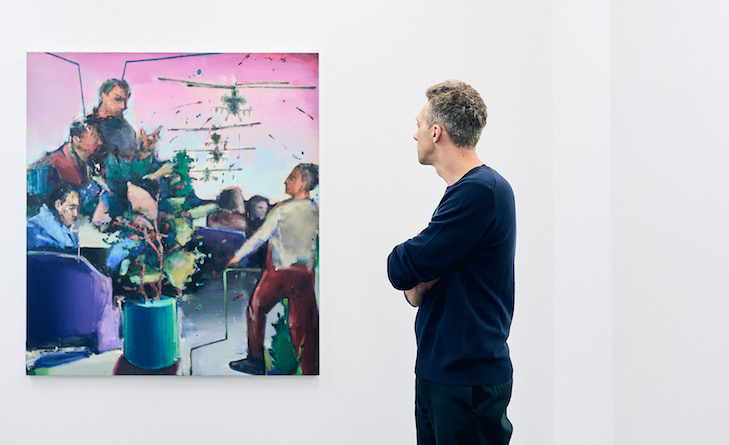 I wanted to interpret the condemnation of Christ to death. The main task as I painted this work was to find the key on how to reflect Jesus at the trial. I chose to paint Jesus in the right corner of the painting. The size of him differs from the other figures, which makes him seem as if from another dimension. The others stand in front of him, but there is a barricade that separates them. I have chosen to paint the helicopters as a symbol of condemnation, as they convey the threat or a mood of anxiety. My aim is for people to sense the worry when they look at the painting and to realise that when Christ’s guilt was pronounced, the people in the picture – and we too – were condemned.

It is very nice you sensed that.

Who would have thought it is Jesus in the right corner, looking like any normal person? But isn´t this just the point? 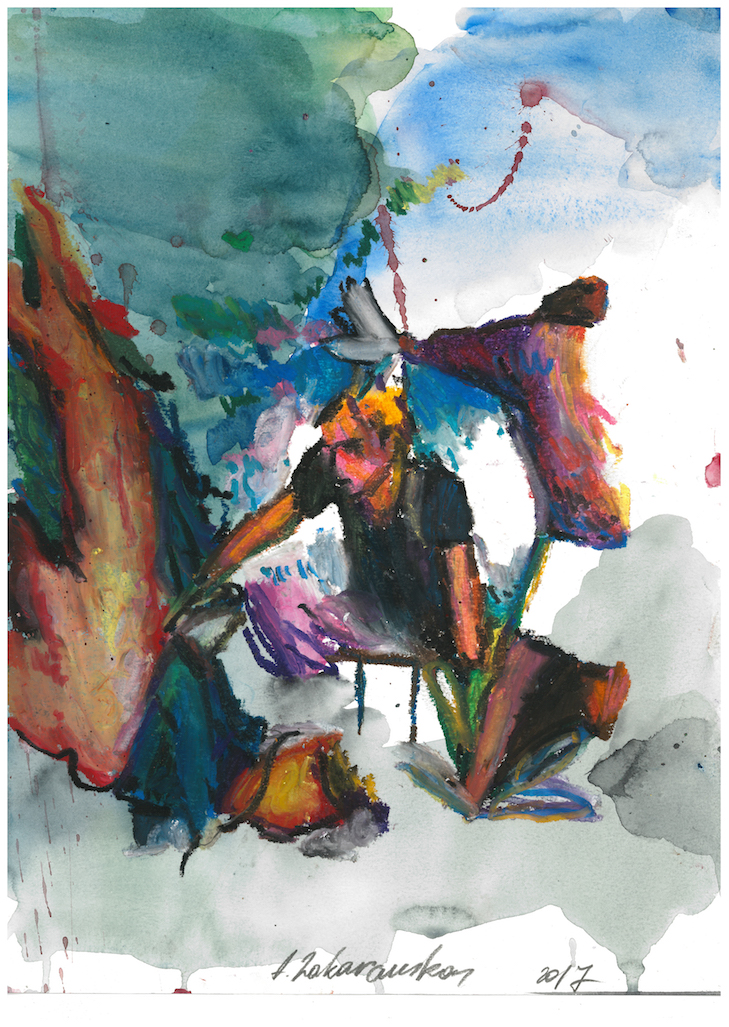 So ultimately that is it you want to achieve in the viewer’s mind?

I want the viewers have an impact on their mind through the painting. My aim is to provoke the emotions of people by these visual stories. I don’t seek for people to  like or dislike my art. I want them to feel something when they look at one of my paintings, not just saying it’s beautiful or not.

I want them to read these stories in the paintings by using their own metaphors, using their knowledge and feelings.

After the WALLSCAPE exhibition Andrius will start to prepare for a solo show in Beijing and in autumn this year he will be joining the residency of the Internationale Kunstlerhaus Villa Concordia in Bamberg for half a year.