As you know, last week was art fair week in New York City. Every year, it’s a time of flights to New York full of artists, collectors, gallerists, and assistants from all around the world. I spent the week mainly at the Volta Show, looking for German artists and German galleries! As a New Yorker, I was able to experience tons of fantastic new work coming out of Germany, and that’s what makes fairs worthwhile. 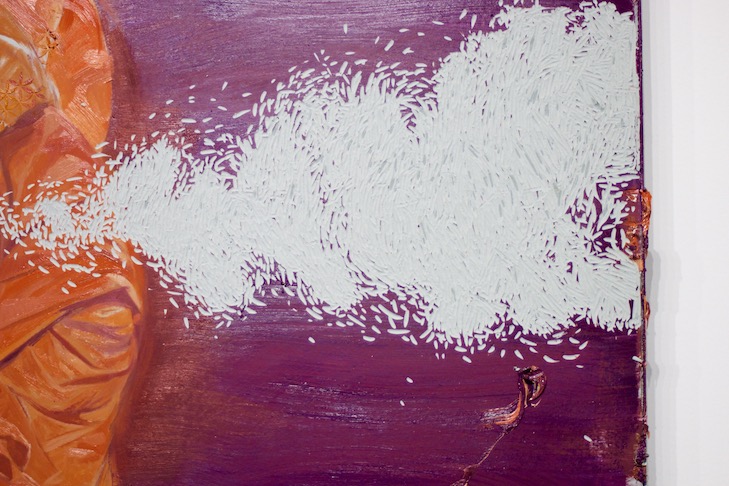 Fair week is when the business side of the art world comes out from the shadows in full force.

The work that sells during fair week, in many ways, sets the tone for what will be highlighted in auction houses, museum shows, and which new artists galleries will add to their roster. Still, in huge international fairs like this, the work is not meant to be the “best” artwork by living artists, as the public tends to believe. Most of the time, galleries with a good reputation in the art world reserve booths, and choose their most successful artists on their roster to bring along. Other times, the artist is so successful that they end up landing their gallery a spot in the fair. Regardless, there is no other platform in which to view this much “critically acclaimed” work by living artists in the flesh. We cannot deny the allure and excitement of fairs like Volta and Armory (also taking into consideration smaller art fairs, centered towards emerging, underground artists)! 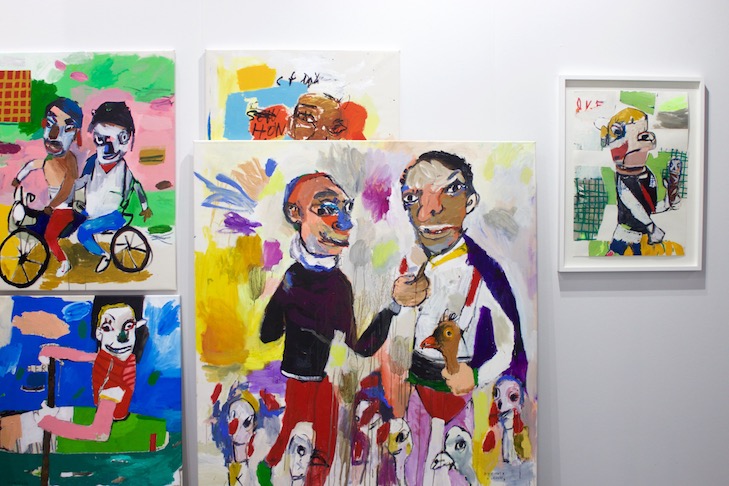 The hundreds of booths in these giant warehouses on the piers can be overwhelming — after two hours your eyes have seen so much new content that it’s hard to imagine there are any other artists making things, anywhere, because you’ve digested enough for years already. But there is more great work out there, waiting to be discovered! One of the most important things to remember is that if some work doesn’t apply to your subjective taste, that doesn’t necessarily mean the art world is swirling around its metaphorical drain — it just means you should pay closer attention to the work that catches your eye.

With all that off my chest, I am so happy to say that some of the best work at Volta came from Germany. Here they are: 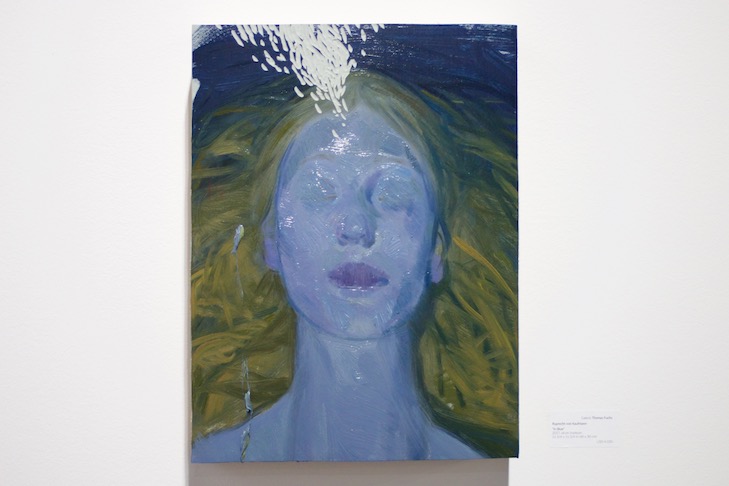 Ruprecht Von Kaufmann is a wildly successful painter living and working in Berlin. His work was represented at Volta by Galerie Thomas Fuchs. What interested me about his work was that he actually paints on top of linoleum, a material used for printmaking. It’s a soft, thin surface that can be carved into with printmaking tools. Ruprecht mounts the linoleum onto a wooden panel, and begins a sensitive oil painting process in which he depicts figures in states of repose, eyes closed, quiet — sometimes disfigured and faceless. Then, he carves into the surface as any printmaker would, creating a negative relief texture that I have, honestly, never seen in painting before. The color of the linoleum carved is a light grey, a color he uses in his paintings quite a lot, so that the speck s of carved matter look like detail work on the canvas — but upon closer inspection, the material reveals itself. 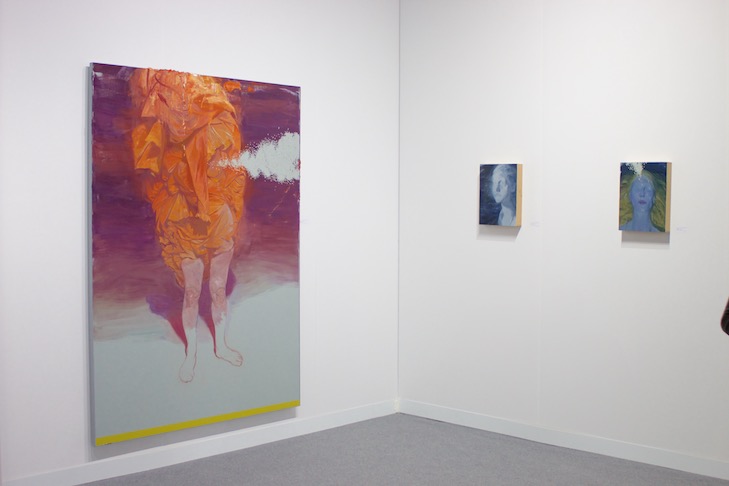 Ruprecht makes naturalistic, figurative paintings that teeter on the edge of playful, childlike illustration and highly rendered academic representation. His color palette is muted and well thought out. As planned as his process may seem, there were moments where I could tell he took a risk — and the painting would not be the same without that quick decision. There is no sense of space around his figures.

They seem to exist in a vacuum of atmospheric haze.

This simple plane they rest on, it is not laziness. It’s a choice. The psychological space the figures comprise is just enough — there does not have to be a physical space in order for the composition to feel complete. 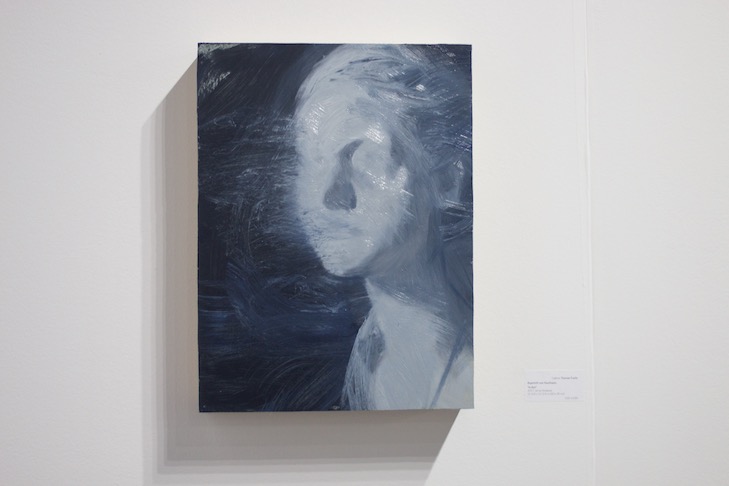 Along one wall of the booth, there were a few smaller portraits. These portraits were so delicately painted that the faces seemed to leap from the surface — most interesting because Ruprecht’s process is to carve into that surface, making it a sculptural object as opposed to a glassy illusion.

Christoph Ruckhäberle was featured in the Galerie Kleindienst booth at Volta. At first, I was overwhelmed by the bright wallpaper that covered the walls, behind his paintings. Sometimes, artists choose to accompany their work with a surrounding context of color and pattern, to inform the way we see the work itself. Ruckhäberle is no stranger to this technique, and has done it in many past shows. In his case, it ties together his paintings in an exciting way.

His paintings are fascinating, figurative abstractions using exaggerated curved lines, at times reminiscent of Henri Matisse, and at other times completely different.

Some lines looked taped off, like each linear decision was deeply planned before he made any marks. This kind of painting requires an analytical, mathematical part of the mind I am completely alien to. The color fields in these figures are flat, settled next to other complementary colors that make each other pop. There’s a sense of childlike charm in Ruckhäberle’s work. Some of the figures remind me of little wooden toy soldiers — tight, straight, and unmoving — but after a while, they go dark. His work has a way of inviting you in with charm, and taking you down immediately with a somber hollowness. 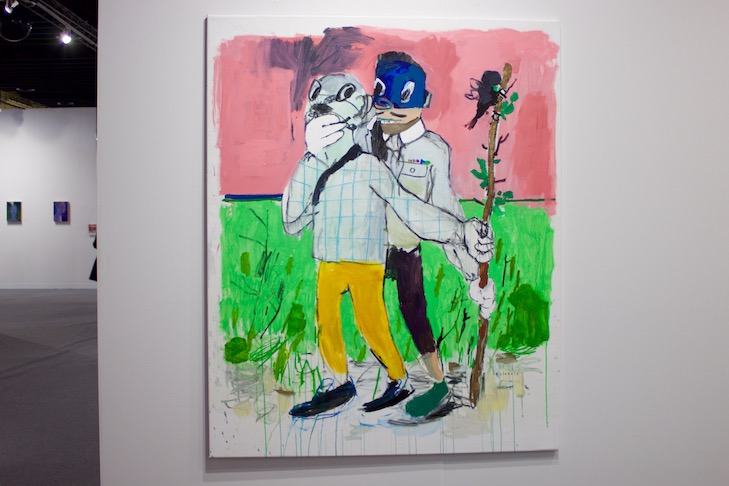 Starsky Brines is a Venezuelan artist represented by the German gallery Heike Strelow. Brines was born in Caracas, Venezuela. His partnership with Heike Strelow has been going very well. All his shows have been sold out — and it isn’t hard to see why. His paintings are completely in the moment, so much that you can almost feel them being made. They are the kind of paintings you expect to still be wet as they rest on the wall of the gallery. The nature of his mark is wobbly, spontaneous. He depicts these alien, creepy characters, often floating, disembodied — surrounded by blocks of sketched color and text. 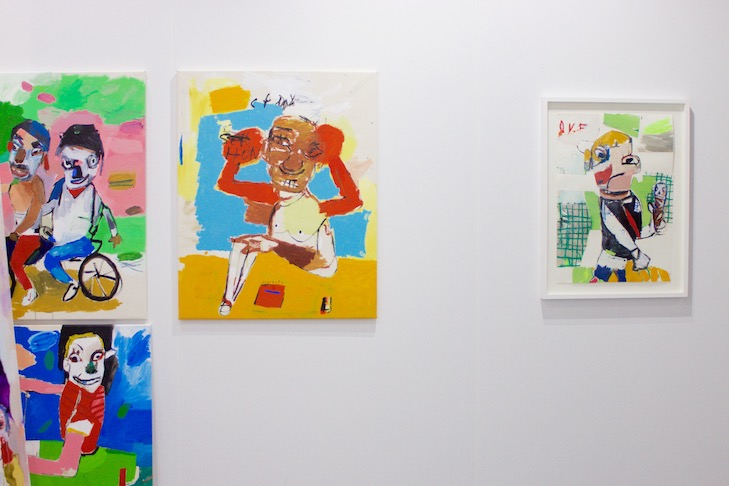 His paintings are also devoid of space, they are flattened by the lack of it. This flatness paired with bright colors and hastily drawn lines create a beautiful, tragic mosaic. There is a carelessness here that we don’t get to see often in painting.

A freeing carelessness that is not set by any formula.

It is completely his own. Some paintings with grand gestural strokes and funny lines are there for the aesthetic purpose of that type of mark making. Brines’s marks are here because that’s just how he paints. Nothing more, nothing less. 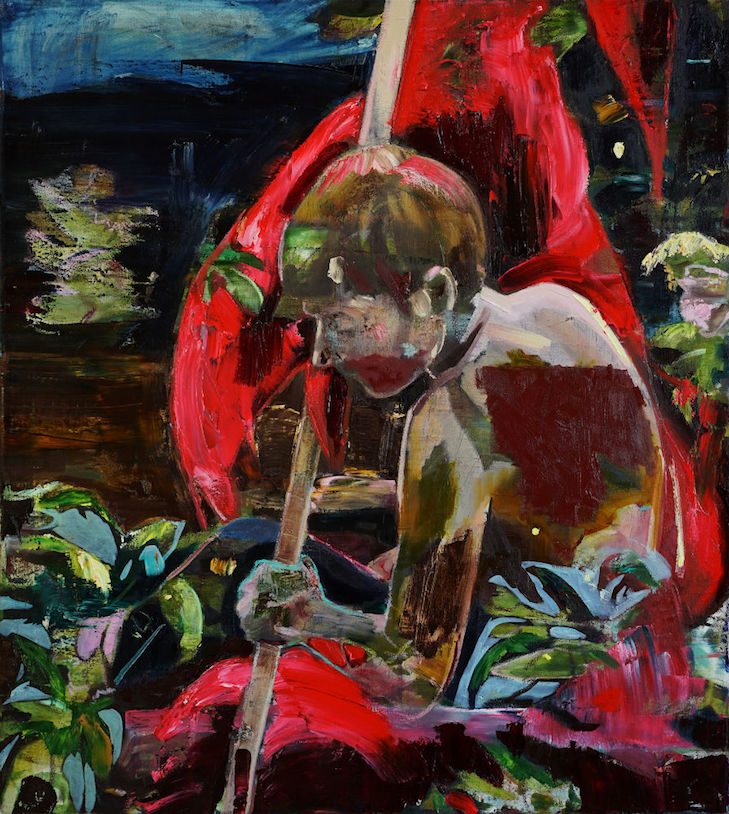 During Volta, Rutgerbrandt Gallery showed two young german artists, Enrico Freitag and Anna Bittersohl. Both work in former East Germany. Bittersohl makes paintings that are vibrant, neon, abstractions of figures within nature against a dark background. The color contrast in her work is striking, and her painting is confident. There are many small moments in her paintings to linger on and appreciate before moving onto the rest of the painting. Enrico Freitag creates somber, dark scenes of figures at work or in moments of reflection. Both artists are super talented, and work very well together. They compliment each other. Anna Bittersohl lives and works in Leipzig, while Enrico Freitag lives and works in Weimar/ Berlin. 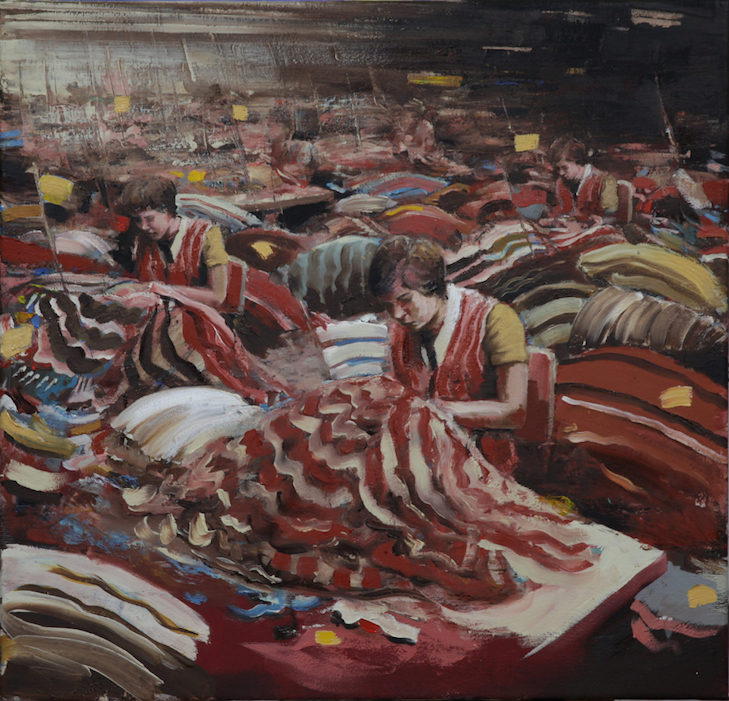 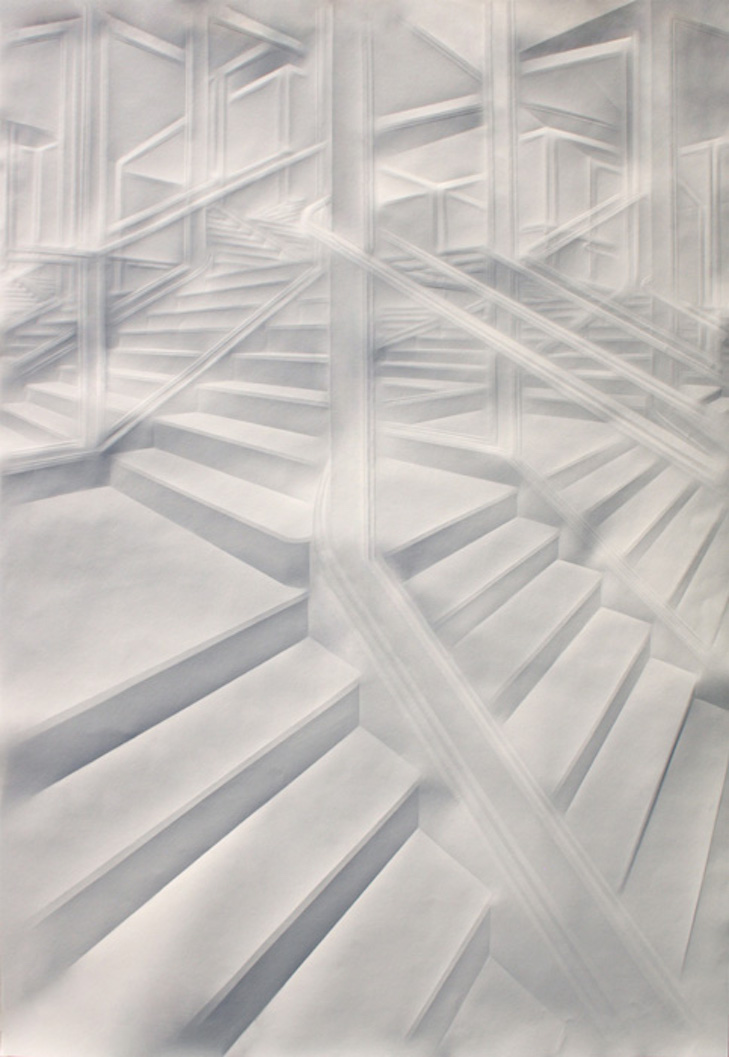 Simon Schubert lives and works in Cologne, and was represented by Foley Gallery in New York at Volta. His works are not quite drawings, not quite painting, not quite sculpture. They exist in a category of their own. Schubert makes two dimensional paper sculptures of architectural spaces. They are monotone, the shadows made with various materials, sometimes even shadowed light itself. These spaces convey a sense of time, space, and most of all, loneliness. They are meticulous, quiet, and empty. The emptiness in these works speaks louder than the material — before I realized what it was made with, I considered the image itself, and as an artist myself I can say that is a feat. The empty rooms could be abstracted into simple lines, but the perspective Schubert creates makes it hard to ignore the depth created by one sheet of folded paper.

The fact that one piece of paper, folded in the right way, can give me a feeling of isolation and solitide — is absolutely incredible. 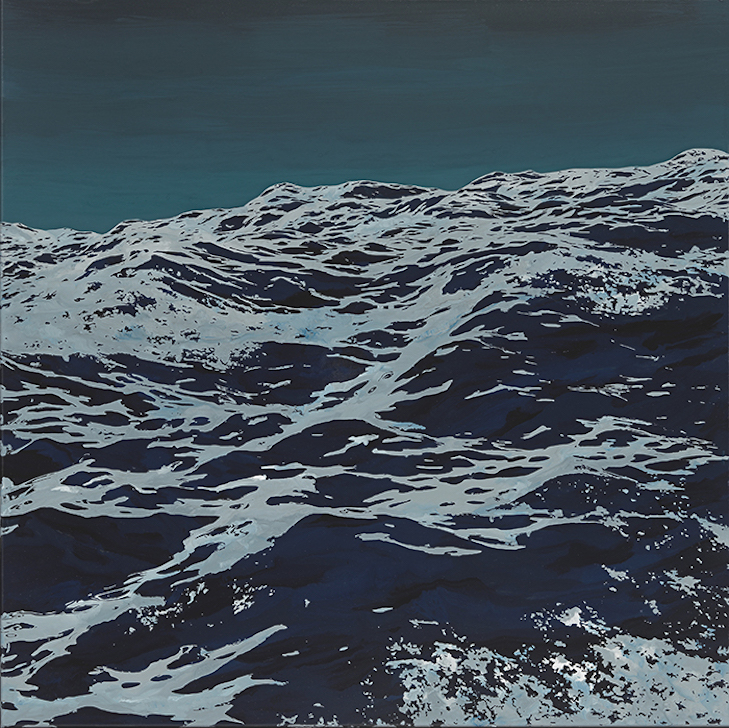 Sven Drühl lives and works in Berlin. His landscapes look common at first, but upon further inspection, they begin to look like an alternate reality, one never meant to mimic ours. Druhl is influenced by the virtual realities of video games — those worlds that almost feel real, but there’s something missing, and we can’t quite put a finger on what. (I think what’s missing in these worlds is imperfection. You cannot program imperfection, because it is random, and appears in almost every pixel of the screen). Drühl’s paintings strive to achieve the perfectly rendered landscape — but there is a sense of eeriness within them. 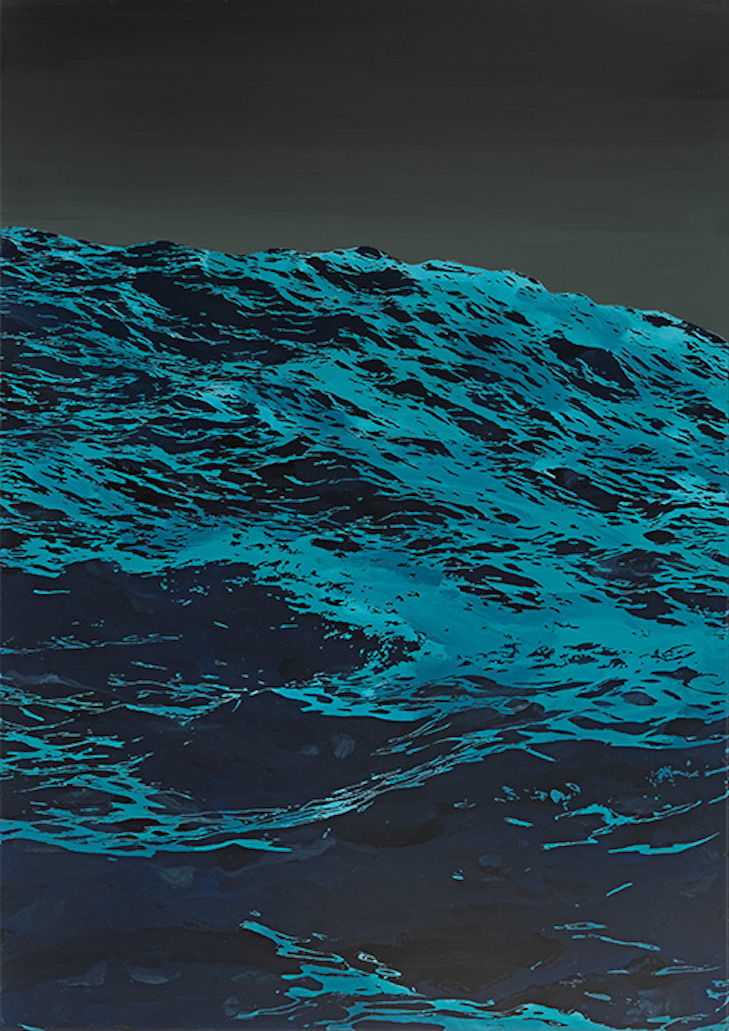 His process includes latex and silicone, completely synthetic materials, adding to the concept of an alternate state of being. He combines these materials with natural mediums, bringing us back to earth. He is interested in mathematics, and employs patterns, formulas, and numbers within these landscapes, recalling the concept of fractals existing within all nature — and the idea of a programmed life that feels real, but isn’t.

The fact that these landscapes are paintings, the oldest form of art making, is important.

It seems that he is drawing a comparison to the human hand that has always mimicked reality — and now, using the same medium, it has found a way to mimic the alternate reality is has created via computer  programming.

As far as I can tell, German artists completely excelled in New York this year and stood out from the rest.

Do you have any favorite German artists? Who was your favorite from fair week? Please leave your thoughts below!

Find out more about VOLTA NY