It’s April, and honestly, we´re not so sure about another moody month. As people say here: April does what it wants and on top, it´s Mercury Retrograde, so brace yourselves! But although we cannot yet celebrate Spring, we can enjoy the arts all around us in the city and there is as always a lot of it in all forms, shapes and sounds! On top from April 27th until 29th the Gallery Weekend is upon us, another fantastic reason to just walk around and dive into new worlds, colours and experiences. Before that, try our selection of paintings, installations, photography and also an outstanding talk-performance. Not bad, right? So, go on, and I am sure we’ll see each other around this month! 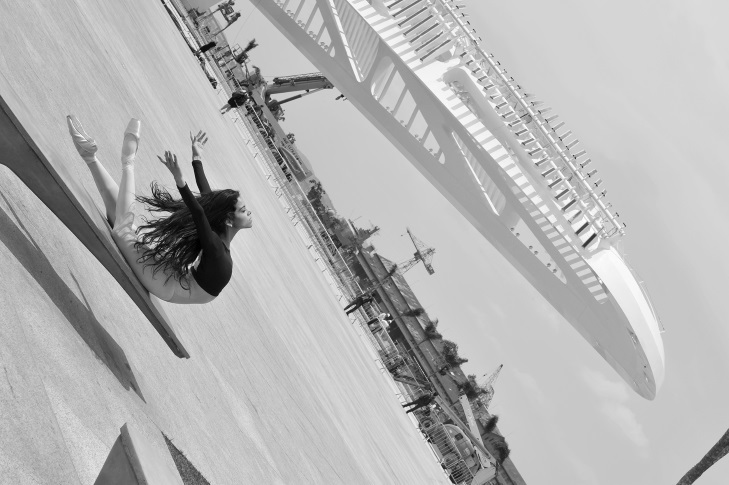 Continuing his project „Dancer Inside“, which places dancers in an architectural context, Simone Ghera is back in Berlin to show his black and white photos made in Brazil in partnership with São Paulo Companhia de Dança. Since 2008, the Italian photographer shoots dancers around the world outside stages or dance studios. The scenario is urban and, sometimes, defy gravity, such as stairs, industrial constructions or squares. Each exhibition gets the name of the city or country where the photos have been taken. The next editions include Riga, Geneva and Moscow. Dance away! 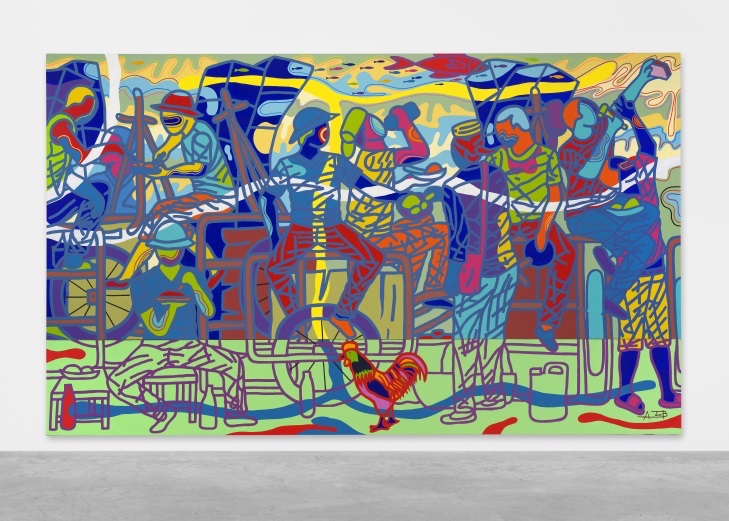 Until 13th of April

Snapshots of everyday life in Douala, Cameroon’s largest city and economic capital, painted in vivid colours. That’s Ajarb Bernard Ategwa´s narrative for his show “The New Dialogue”. With his large-scale works, the Cameroonian artist transfers to the canvas freehand drawings inspired by taxi stands, newsagents, bars, roadside markets, hair salons, and people in public spaces. Street Life so to speak. The idea is to deny the stereotypes about Africa bringing a new look into Douala pop culture – the city has a lot of foreign influences and recently had an influx of migrants from inside and outside the country. This is also the first solo exhibition of Ajarb Bernard Ategwa in Europe, so make sure to visit, it ends 13th of April! 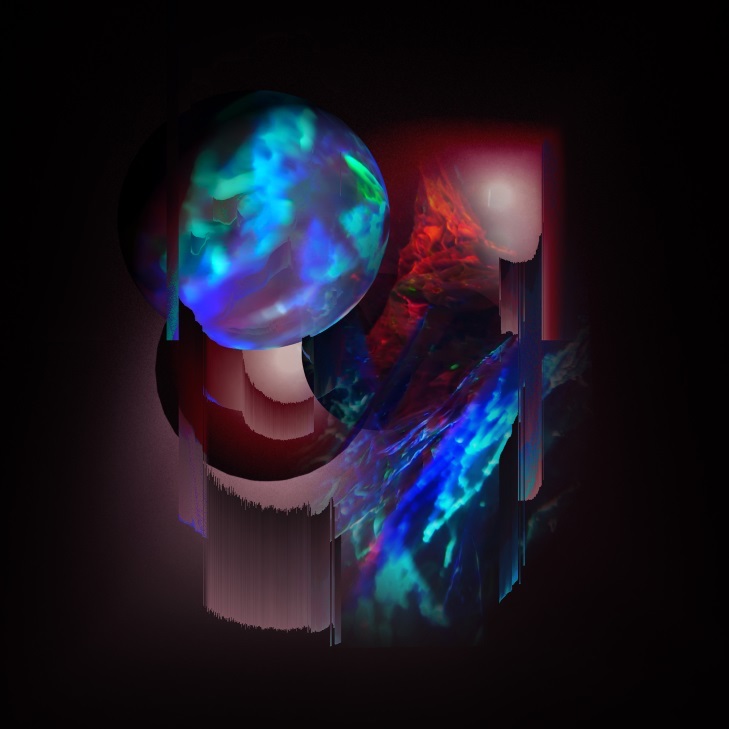 With audiovisual performances and installations by Brian Eno, Thom Yorke, Lara Sarkissian, Tarik Barri and more six international artists, Gropius Bau showcases the ISM Hexadome. The structure, developed by the Institute for Sound & Music in collaboration with Pfadfinderei and ZKM (Center for Art and Media), merges art and technology and offers an immersive 360° experience. Why is it so unusual? Because the ISM Hexadome is a new format and also a new tool, a kind of the next step for the electronic music culture, so we can´t think of a better place for it´s premiere! After Berlin, the exhibition will travel around Europe and North America. Dates of installations and performances are available at Gropius Bau website. Best to check it out before you go. 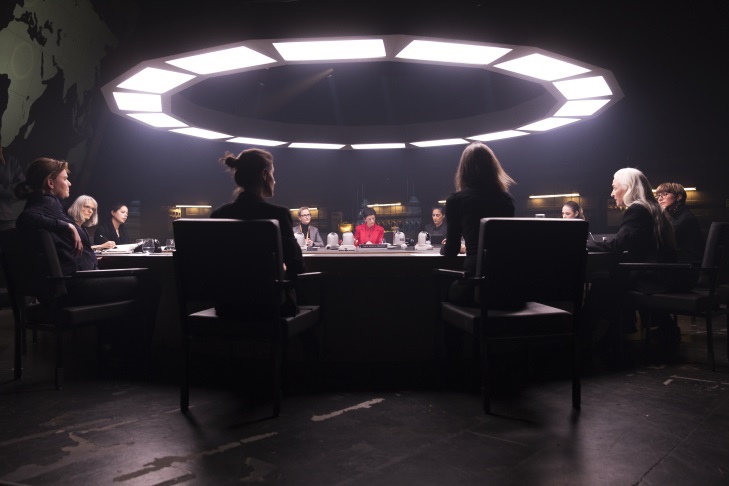 What if women ruled the world, Aarhus 2017. Photo: Birgit Kaulfuss

Volksbühne // Yael Bartana: What if Women Ruled the World?

Yes, it is not an exhibition, but it is also an artistic experience. During a hypothetical apocalypse, the multimedia artist Yael Bartana, as president of a country with a pacifist constitution, leads a group of “ministers” to face the dilemma: while another country is announcing the increase of its nuclear warehouses, should they continue with their original program or give up their one-sided disarmament? The “talk-performance” is inspired by Stanley Kubrick’s film “Dr Strangelove or: How I Learned to Stop Worrying and Love the Bomb” (1964). The list of participants includes the human rights activist Seyran Ateş, the director of Dachverbandes der Migrantinnenorganisationen Virginia Wangare Greiner, the political scientist Kübra Gümüşay, the nuclear weapon expert Dr. med. Beyza Unal, the scientific associate at Peace Research Institute Frankfurt Carmen Wunderlich, the vice-president of the Change.org platform Paula Peters,  the professor at the Royal Danish Defense College Carina Meyn and, as actresses: Olwen Fouéré, Jo Martin and Anne Tismer. The talk is in English. 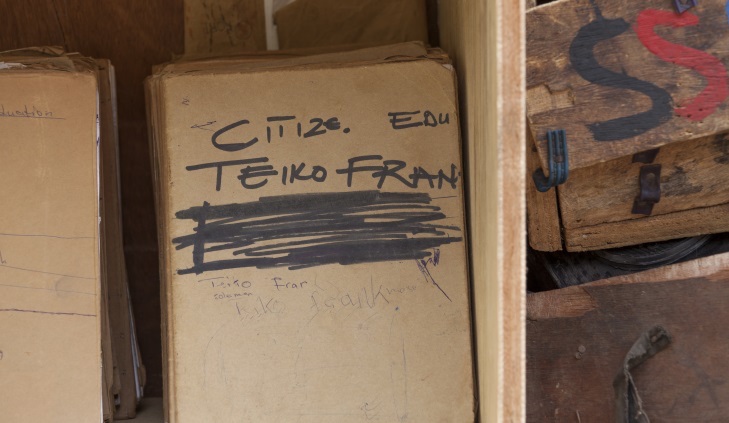 A Straight Line Through The Carcass of History._1

For his first presentation in Berlin, Ibrahim Mahama mixes materials and documents from different regions and origins. There are hospital stretchers from World War II found in a scrapyard in Athens, old household textiles used in fish smokeries in Africa, school notebooks, and remnants of German and British railroad cars collected in Ghana, his country of birth. With this arrangement, the artist proposes a journey through history having a start point with its material traces.  On April 15th there is a guided tour with Mahama when he will give more insights about Ghana and its global interconnections. The artist had also presented works at the Venice Biennale in 2015 and documenta 14.