Transcultural Transience is the second chapter of the curatorial collaboration Karma Ltd. Extended.
Through the creation of newly commissioned works Rehearsal of the Futures: Is the world your friend?
by Isaac Chong Wai and Rachel Monosov’s Olympia, the exhibition is questioning how embodied collective memory can be dealt with through performance. Pauline Doutreluingne and Petra Poelzl, curators of the exhibition, talked for ARTBerlin with the two artists about their ideas and artistic approaches for the exhibition. 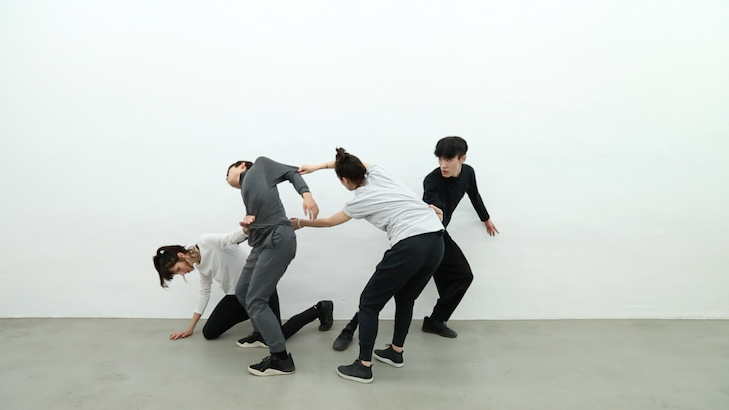 Petra: First we should point out that Rachel and Isaac have never worked together before. You don’t even know each other, so this is going to be a promising and exciting journey for all of us. Before we talk about the project per se, Isaac, when was the first time you created a performance? And how did that come about? 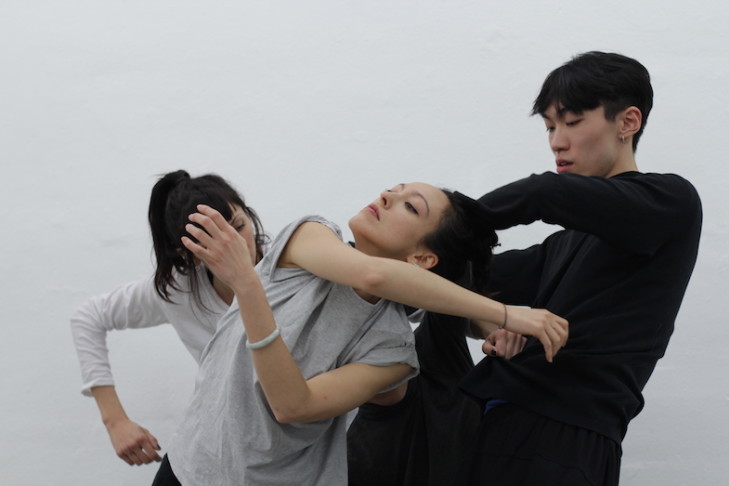 Isaac: I think it was in 2011, starting with a pencil and myself, using it to show how much I could possibly draw in a space. Back then I was having a solo show in Hong Kong. The overcrowded city inspired me to the point of doing a series of performances basically to get closer to people. First, I was referencing the idea of the metro where people are so close to each other. Then I started to also be interested in of gatherings. Why and how do we gather right now? In what form?

Petra: Rachel, when we came across your work first you were involved in Transcultural Protocol, a performance that was done together with the artist Admire Kamudzengerere and six dancers as the opening show of the Zimbabwe Pavilion at the Venice Biennale in 2017. For that piece you had the role of choreographer. Are you performing yourself as well? 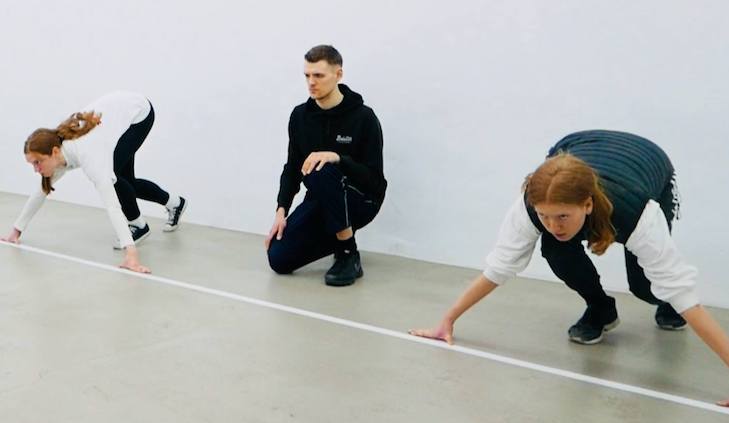 Rachel: My first and only performance I ever participated in was during my early studies around 2009. Back then, I had such a big fear of the stage and people in general. I was actually wearing a mask for the performance, so I couldn’t see what was happening in the space. Looking back, the performances I created have different natures. There are some that are more interactive, and others that are more static. Recently I started choreographing, which to me is more like directing a live film. I am inventing movements. The movement is coming from my words and the dancers react to them. It is a conversation between words and bodies: an exchange and combination of two languages. 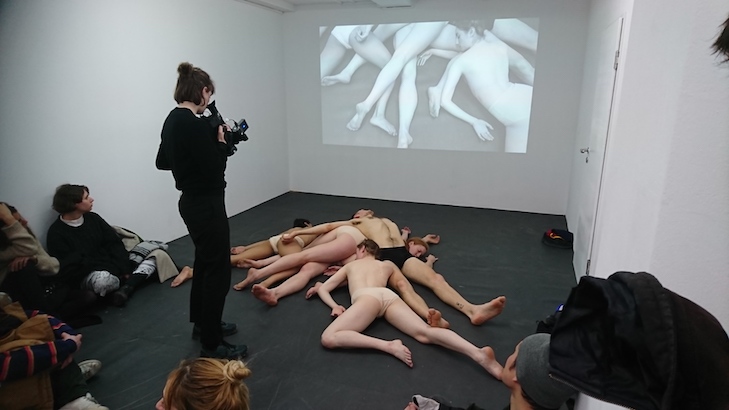 Pauline: Respectively, in your newly commissioned works for this exhibition you are both experimenting with slow movements through which the body becomes a visual image. For both of you, there are very specific images you are departing from.

Rachel: This specific work Olympia came from me moving to Berlin. I was re-watching Leni Riefenstahl’s film Olympia about the Berlin Olympic games in 1936. I had tears and was emotionally disturbed, not because of what I saw but because of what I didn’t see. On screen, these shots of beautiful young women and men. But what was happening outside that movie frame? The only thing I saw were these fragile moments of human beings before they are supposed to show their strength. It was my own neurotic fear, memory, and history resonating with the single few seconds. So, this extraordinary event being reduced to a really super fragile, terrifying, unknown moments, is the image that I want to create for this new piece. This is my starting point for the work. I want to reproduce, reconstruct, repeat, explore, and reenact—this in my performance. 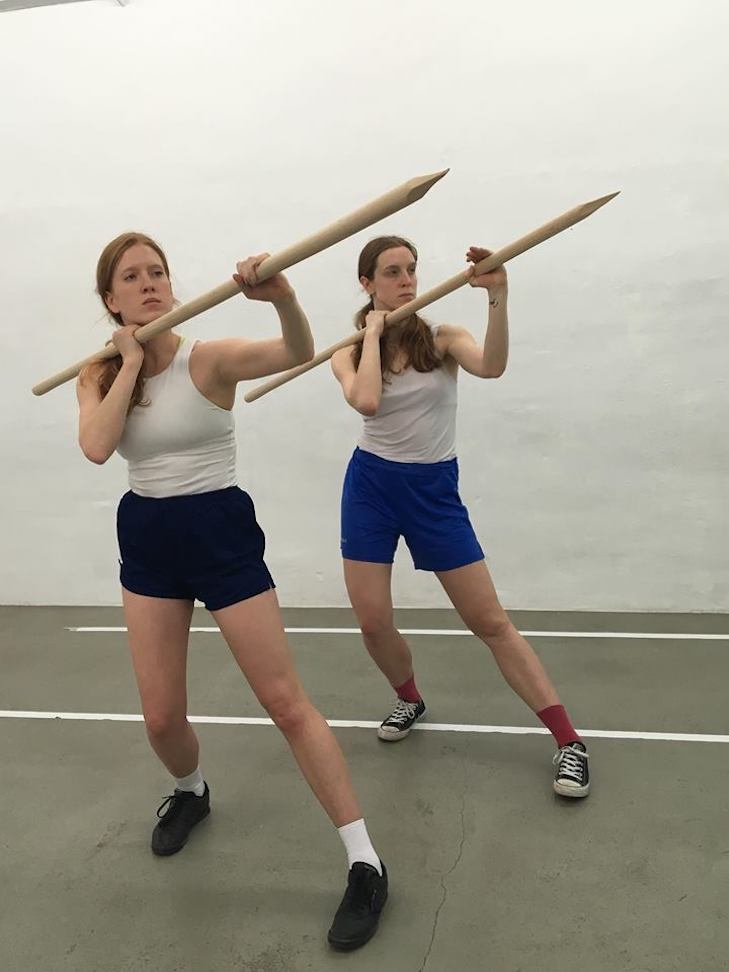 Isaac: I am interested in deconstructing an image through performance. My whole idea about this new work, started with a performance I did before, in which I was gathering around one hundred people in a historical square in Weimar that was built by Hitler and cannot be entered publicly. During the performance, people and passerbys were asking me if it was a protest or not? And I said it’s not a protest, because instead of fighting for something, everyone was talking about their own personal stories. Actually, the city even told us that if this would be a protest then they would not be able to allow us to do this or else they would have to allow the Neo-Nazi groups to do the same thing as we are living in a democratic state. I found that very interesting, how gathering could be a form of art, and how people could associate it as a protest. It made me very interested in the public presence of bodies. So, for that new project, I am working with a lot of images of gatherings that I have basically seen on social media. 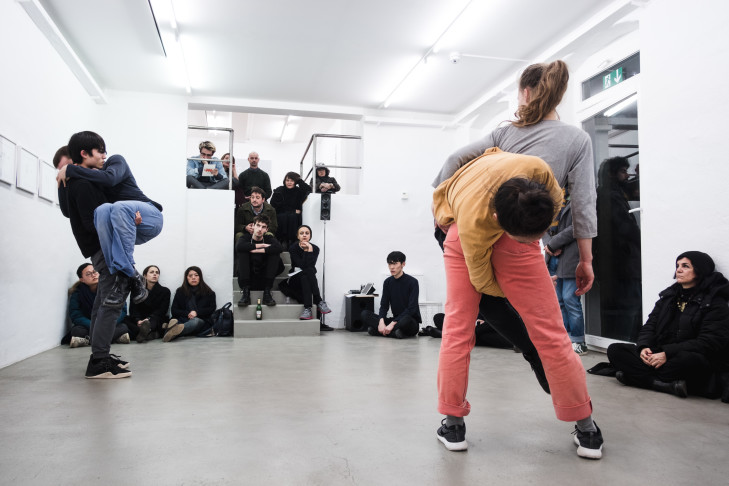 I am editing all these kinds of choreographies of how protests are functioning. For example, think about fighting in slow-motion. If we throw a punch, we need speed to follow up, and then if we slow it down instead of hitting, you’re actually touching someone. By slowing it down it is a sort of a reconciliation of the balance. Some people said that my work is very minimal. For me, this very minimal thing is actually more violent. Or: It’s even doubling the violence.

Petra: How come the act of hitting becomes such a central action for you? Does it stem from some personal experience?

Isaac: Somehow yeah. I got beaten up in Berlin once. It was just one guy bothering me on the street by saying „Ni Hao, you Chinese? Korean?“ And then he tried to trip me to the ground, while trying to steal my stuff. I shouted at him and then he got offended because I was fighting back. Afterwards, I tried to research these images of how people fight on the street when they are drunk or also in protests. 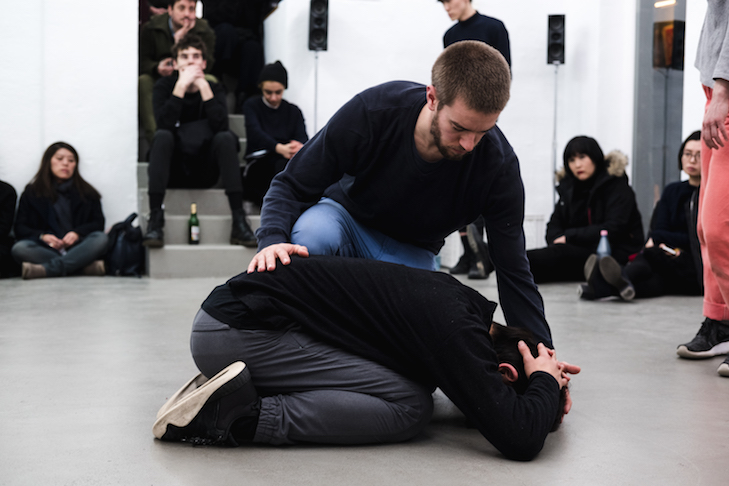 Pauline: In both of your performances, Rachel and Isaac, it’s a kind of zooming into internally human images and movements. Looking at Olympia, Rachel, how much rehearsal is needed or how much spontaneity will you allow?

Rachel: For this performance especially, the structure is very important because of the body training and the very precise and synchronized movements that the athletes do. For me, I try to see these three hours as a progression from the sublime aestheticized, glorified, very precise moment to these very unknown and minimalistic places of where we are going from here as a group. And maybe, instead of training ourselves to be the best to win from one nation, we actually need to hold each other before we run. 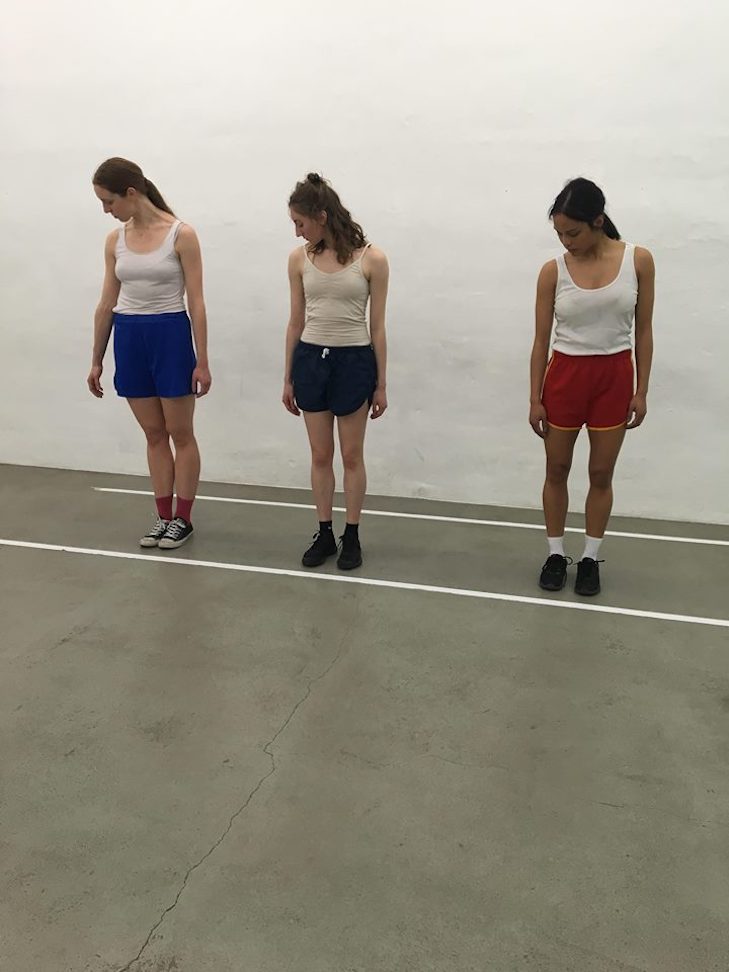 Pauline: Your works are also dealing a lot with exhaustion, going deep into movements that become imprinted and embodied. What about beauty in exhaustion?

Rachel: Sure, in a poetic sense. In reality, you are being smashed. This is also the difference. What we represent, and what touches us, versus what we want to confront. It is interesting even to watch the Olympic games of now and then, the athletes were much less muscular, like nobody really had these muscles. Like now if you look at the Olympic games, the women, men, they’re huge! If you look at the film, they’re super slim. Apparently, they are strong, but aesthetically they have completely different bodies.

Isaac: I think what we said about the weakness of the body and the beauty of it, where we are celebrating the weakness somehow then we are smashing the reality. I think in both of our works; the connection is humanity. 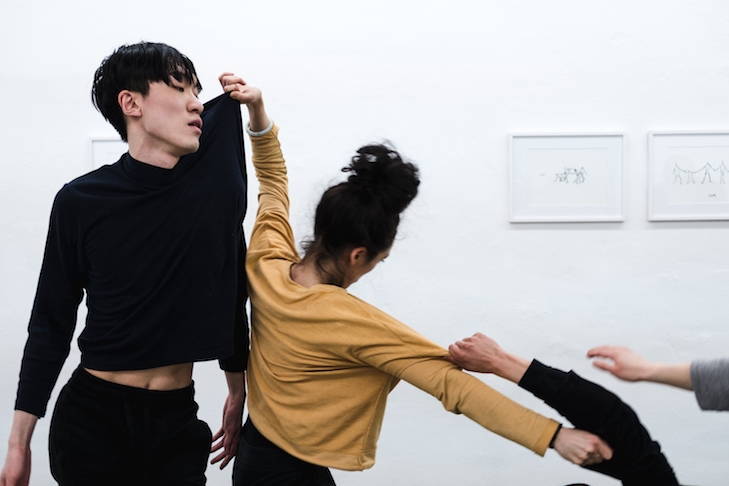 Rachel: And maybe the lack of this, to this in general the world everything with such aggressive imagery that it feels like how did we lose this? We are completely out of there.

Petra: It’s kind of a connection that gets more and more lost as more things become digitized.

Rachel: And violent, and visible violence. No touchable violence, in all our computers and media. Like you’re just lost in these images, like even the images you never see in real life.

Pauline: Exactly, like we are distant, we have all these global connection routes. All these social media things are an illusion.

Petra: Lets go back to your new works again: It’s interesting how Isaac’s topic of protest is going to join your performance about the Olympics. And how the beauty of it will come together at the end.

Rachel: What I like is that the dancer will transfer to be the protest as body.

Isaac: Some of my performances are about constructing different kinds of posture, like a fighter. Also, the kind of the perceived external power of the people representing the Olympics, and how it is still constructed today. What does this perfect bodies mean, and how do other people look at it?

Rachel: Yes, to control, and help each other and function as the perfect body.

Isaac: In a way as a sign of solidarity but it is also disturbing. Is it helping or imposing when it is so constructive? 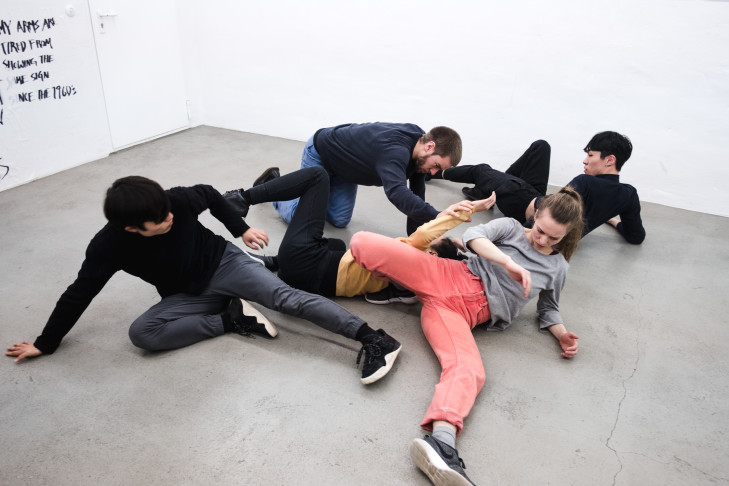 Pauline: How free is a body while protesting? It is how people are marching on the street or if they are protesting against something, they may adopt a certain body language and posture of anger or sadness. They can be perceived as protesting codes in a way.

Isaac: Yeah, and I think our job is to read these kinds of ideological movements and gestures.

Rachel: True, because physical education is categorized as improvement of individuals in society. I’m thinking about physical education, not just sport or protest. Why we educate our body when we don’t agree with something, we should act violently. Why is this? Why do we protest? Why are we angry? Why do we feel like we need to beat everyone? 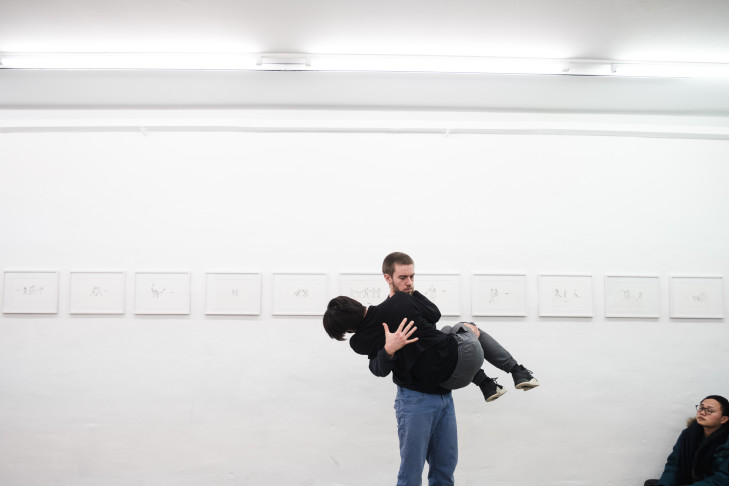 Pauline: Why don’t you sit sadly in a corner?

Rachel: Yeah, I will go to this protest for sure. The sad corner Protest.

ISAAC CHONG WAI – REHEARSAL OF THE FUTURES: IS THE WORLD YOUR FRIEND?

The newly commissioned durational works by ISAAC CHONG WAI and RACHEL MONOSOV question how embodied collective memory can be reconsidered and dealt with through performance. By looking at large-scale gatherings, such as demonstrations and the Olympic Games, the artists are investigating the role of the individual within those assemblages. What is the function of the bystander, who unexpectedly becomes part of a public demonstration? And what can we make of human bodies, marked by weakness and perfection, which become symbols for a national or political struggle? These are examples of questions that arise, more frequently so within our societies becoming rapidly digital— as human activity becomes increasingly virtual, and the line between physical and virtual spaces our bodies inhabit become blurred.