The Cosmos of Cristina Canale

In the first part of our Brazilian Month we focused on upcoming artists from the Latin American country. Now it’s time to visit Cristina Canale, one of the grande dames of Brazilian contemporary painters. Luckily for us, Canale mainly lives and works in Berlin, where her cosy 4th-floor studio in Kreuzberg has an eyrie-like feel to it with its piles of paint and canvases, its tableaux of books, scraps of patterns pinned to the wall, and other bits and pieces that she collects for inspiration. In other words, her studio is an ideal and very comfortable setting for our talk, so follow us into the cosmos of Cristina Canale! 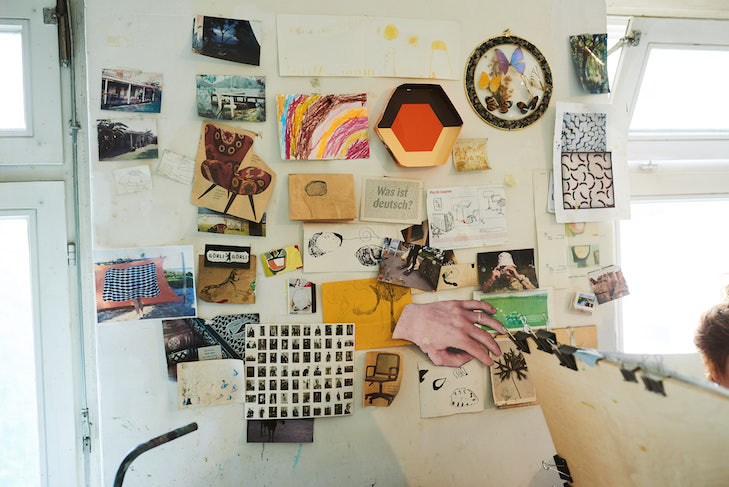 Cristina Canale was part of the so-called 80s Generation, but before going any further, we’d like to acquaint our readers with the origins of this movement. Geração 80, as it is known in Brazil, came about as the result of a group exhibition held in 1984 at Rio’s Escola de Arte Visual do Parque Lage – a progressive art school at the time which exists till this day. The show, which involved 123 artists, had no curational theme and the artists had to hang or install their works themselves. The event one must imagine, was fuelled by the excitement of the political dawn of the 80s, a time when a democratic regime came into power following a dictatorship that had restricted avant-garde work for 20 years. In other words, the exhibition marked the return of painting to Brazil – hence the name „80s Generation“. 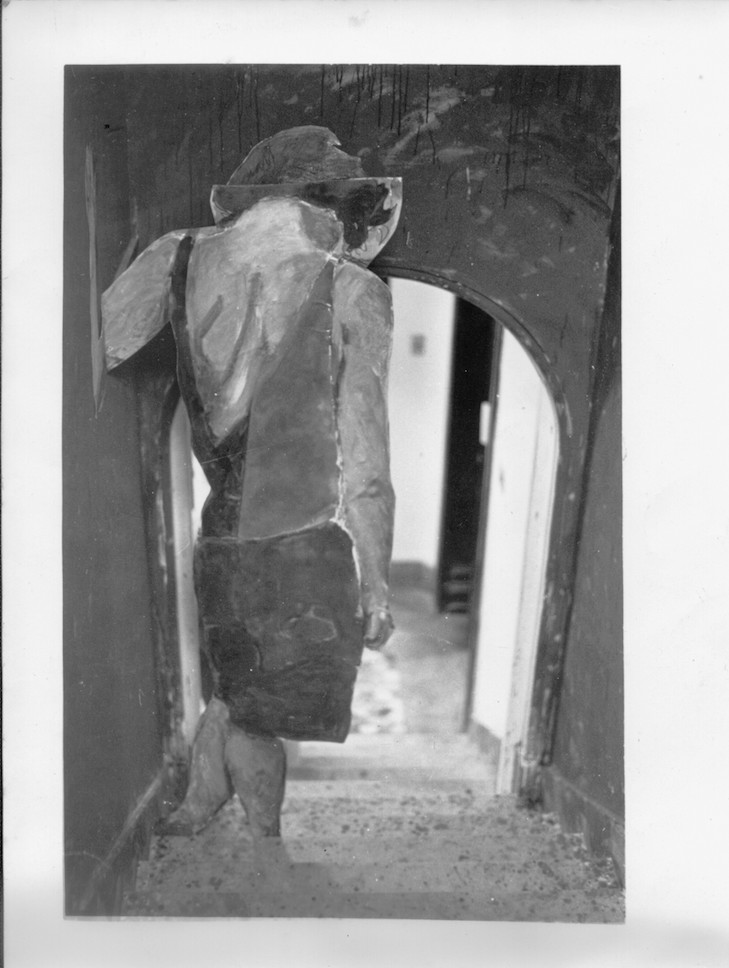 Canale was part of this group show, but ironically enough, the only documentation she has of her contribution, an installation, is a black-and-white photograph. (Being a young artist at the time, she wasn’t aware of the importance of having a good photo taken.)

She soon established herself a place in the movement, and gained all the logistics a successful artist has, like a gallery to show her works and collectors to buy them. But instead of continuing to play it safe, in the mid-90s she decided to leave her comfort zone and apply to study in Düsseldorf at the Academy of Arts (where else!). One has to be aware that Canale was already 30 by then and was therefore not a typical student.

To her surprise, she was accepted to study under the Dutch conceptual artist Jan Dibbets, who in the late 60s had completely abandoned painting after meeting Richard Long and other artists working in land art – making him an unusual professor for someone wanting to study painting. Canale says Dibbets wasn’t too impressed with her work when she applied, but that changed after she took part in an artist residency programme in Germany and discovered outlining for herself in her work. So her will to develop and location was a perfect match! 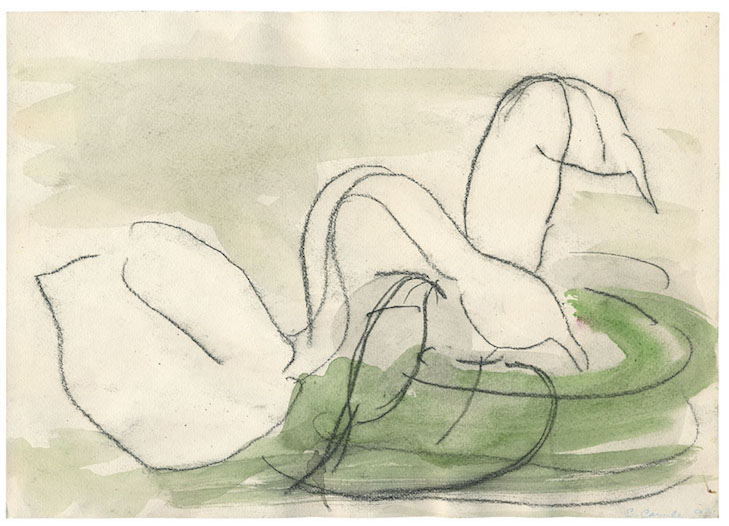 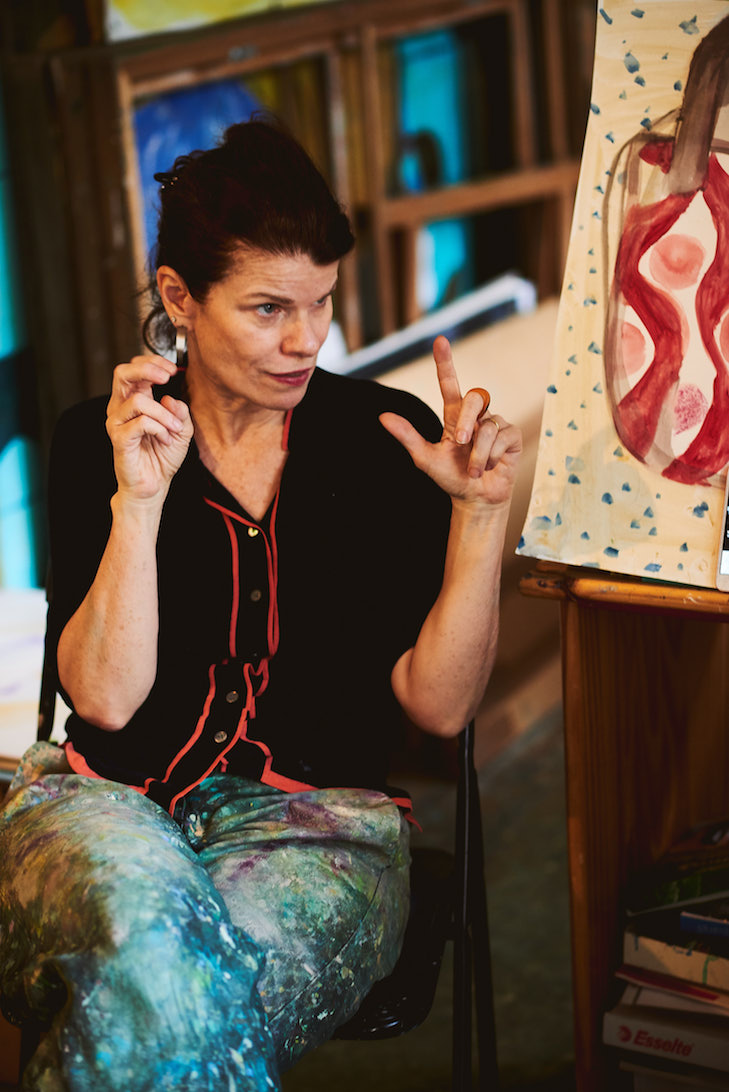 In general much can be learned and discovered by tracing the developments and changes in the 30-plus years of her work. Some of her early pieces remind me strongly of Chagall before they get darker and deeper, she was experimenting and for example also incorporating fabric into her paintings before her work began to gain a new vibrancy and clarity in 1993.

In the 2000 years, her paintings became more abstract, with strong colours predominating and people putting in an appearance in her work. One of the things that fascinate me the most is the way she uses colour, patterns and rounded shapes – rather like Matisse – to construct the narrative in her works.

Or to put it differently, if you look closely you will discover a certain dynamic and swing that for me is reminiscent of the patterned tiles that play an ubiquitous role in daily life and architecture not only in Portugal but especially also in Brazil. 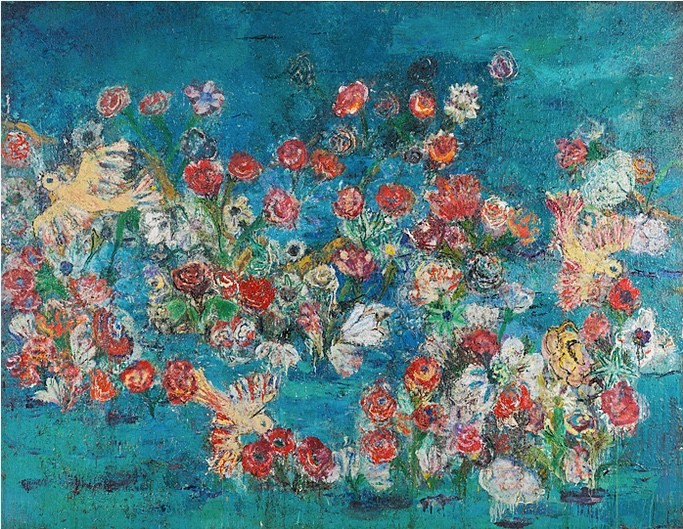 The patterns on the daily-life objects she depicts and the overall patterning of her paintings – obtained by breaking up patterns and putting them back together in her own orchestration – have a harmony of their own which are holding a deep and calm satisfaction once you get into it. 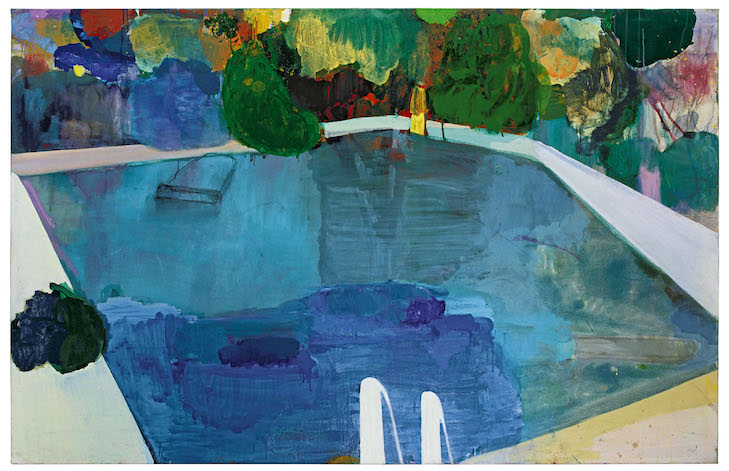 Please describe your creative process when you paint. what is important for you.

I have a strategy to work with a specific universe or theme as a serie. It allows me to explore a universe of vocabulary and work in more than 10 pictures at the same time, one picture helps me to go further by the other. The reduction of the elements in the picture to the essential helps me be clearer in the duality figuration and abstraction. It is important for me that the paintings work out as a whole of material and image. The painting must „happen“ as an object. The formal values are as important as the image. 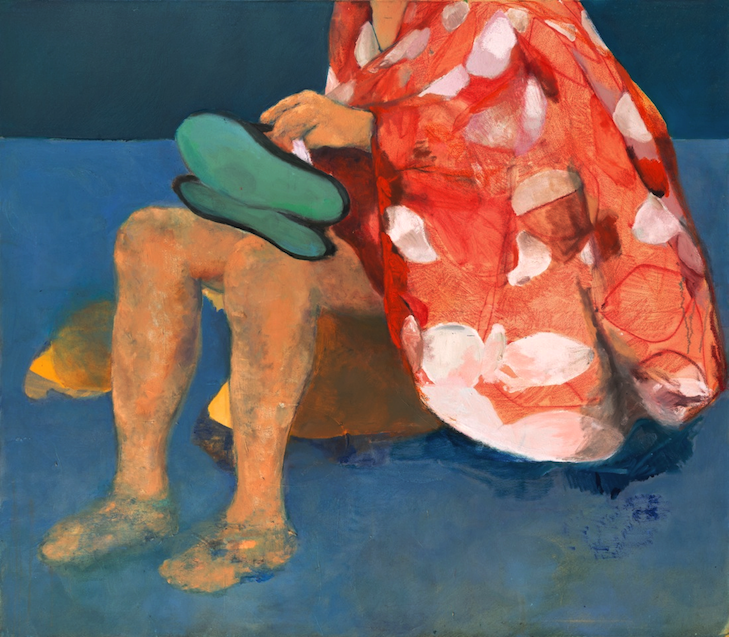 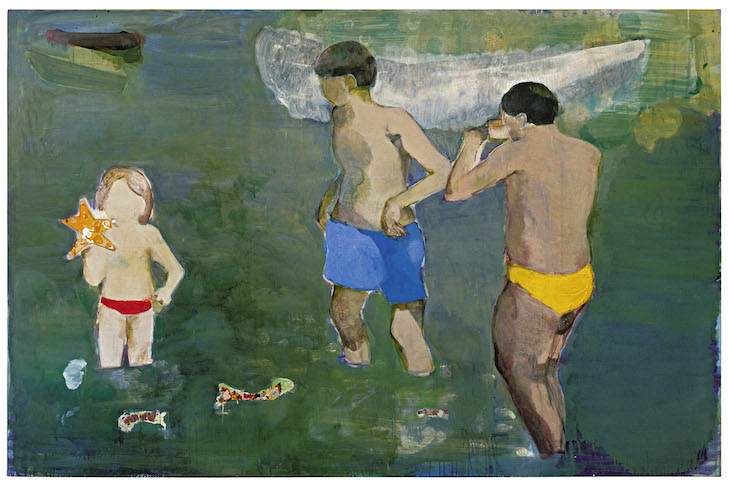 Why in particular do you choose Jan Dibbets to study with?

I just wrote the Düsseldorf Akademie asking for a Teacher possibility if I would get the DAAD scholarship. It was for me a big surprise when I got a letter from them saying that Jan Dibbets would accept me in his classes. I knew Dibbets work from the bienal de São Paulo 1987. I was glad, as his work is quite different of mine and I was looking for a debate, new confronts and challenge. 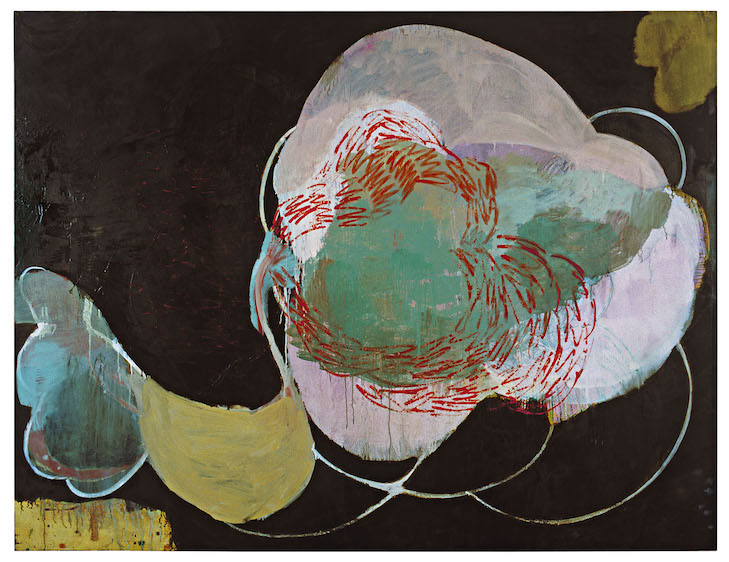 Which artists influenced you most when you grew up or made an impression?

I grew up in the 60′ and 70′ , with a lot of geometric art and modernist arquitecture all around. It could be boring in a way, and at my very beginning as an artist I was more looking into the opposite direction, more expressiv, like german expressionismus and american abstract expressionism. I also liked to look at paintings, from renascence to contemporary and see how the painters in the last 500 years solved their problems and construct a language for themselves. I have a special love for the Fauves, Picabia, Guignard (brasilian artist from the 30′ ) and a few constructive Brazilian artists as Volpi and Maria Leontina. 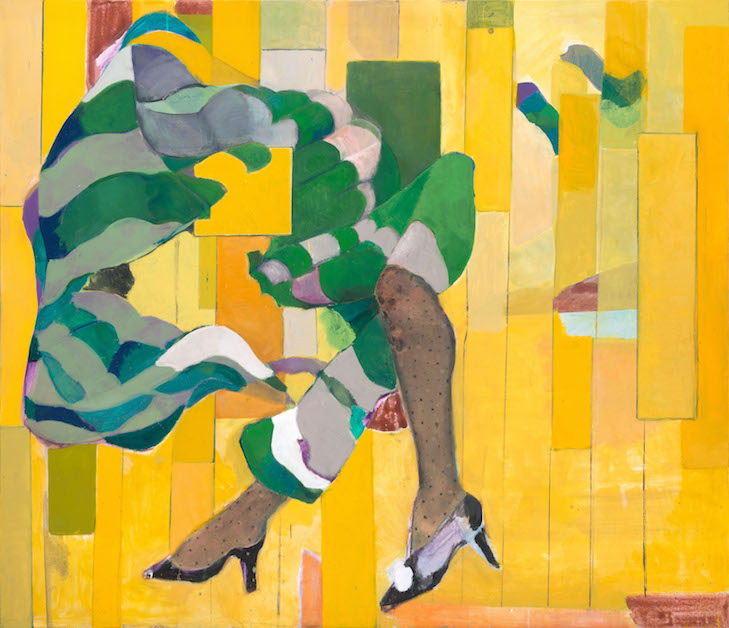 Name us a few young brazilian artists you think are worth checking out for our readers and why?

There are quite interesting group of young brasilian painters at the moment! I would take a look at the work of Daniel Lannes , Tatiana Blass, Álvaro Seixas among others. I like the way they deal with the tradition and offer fresh solutions in their works.

When asked what she needs for her paintings, she answers simply:

Die Anwesenheit der Welt, the presence of the world. 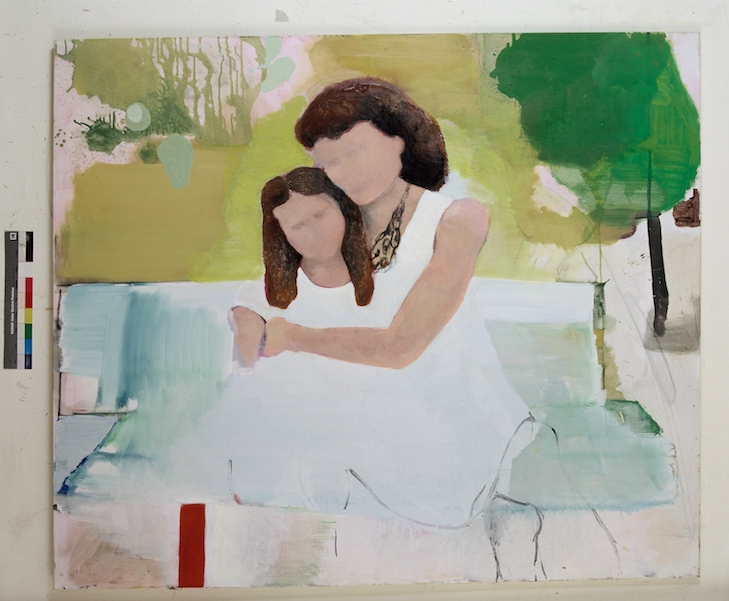 The next opportunity to see her work is at a group show of her gallery Nara Roesler in New York.

The exhibition is described as a multimedia collective show that brings together a wide range of works representing the gallery’s remarkable position as a leading Brazilian contemporary art gallery.

We highly recommend this one, if you happen to be in New York this summer!