For us the month of March was filled with Art Fairs. From Volta and the Armory Show in New York we ventured to the beautiful and sunny city of Milano to visit the MIA Photo Fair and the current exhibition „About Art“ from Keith Haring at the Palazzo Reale, which truly blew our mind. On the way we ran into old and new friends and recorded some of their thoughts on art, life and Syria for you. We hope you enjoy our Italian wrap-up! 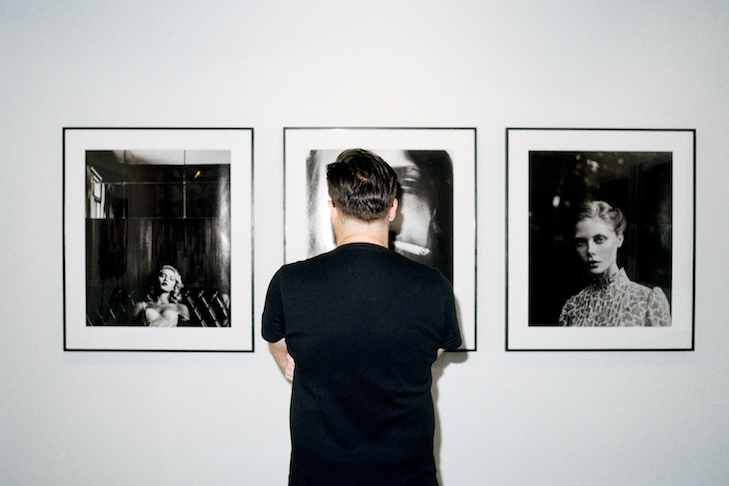 Art Fairs can be boring, exciting, packed, not so packed. You can feel the pressure and tension of the exhibitors and art dealers mixed with the enthusiasm, interest and sometimes boredom of the visitors and buyers. An artificial temporary art bubble, so to speak, that throws all these emotions, expectations in one melting pot. Think of the attending artists as extra spices on the feast  of the displayed art works, that makes it worth the while.  For example the self taught photographer Tom Hoops, who is known as the dark knight of fashion photography. He had just flown in from Bangkok to the fair and we had the pleasure to chat with him: 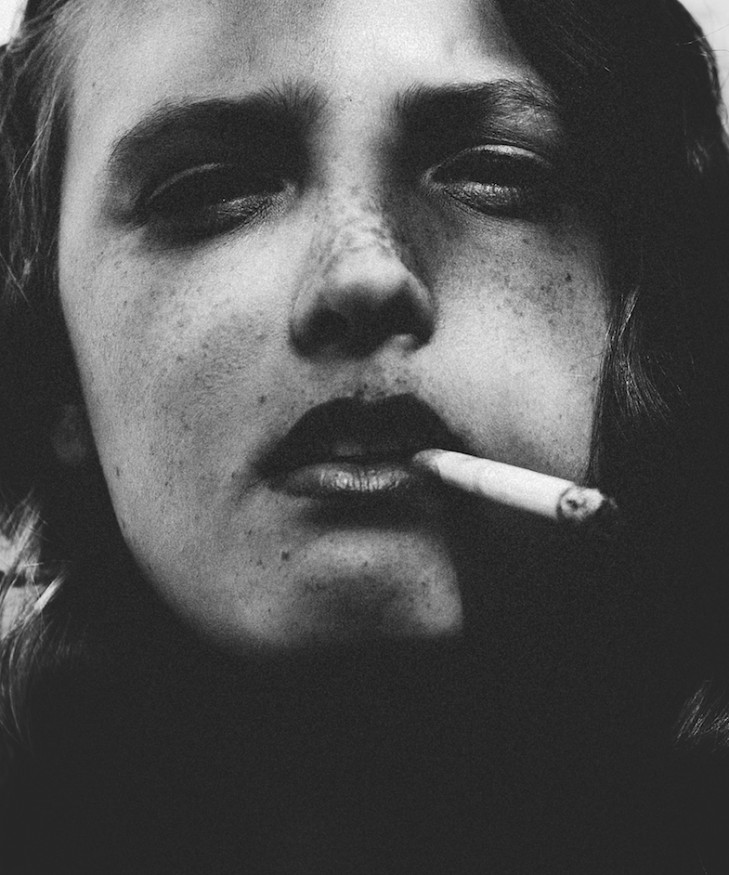 Tom, it was your first time at MIA Photo Fair in Milano. What was your experience of the fair, also compared to other fairs?
The fair was an interesting mix of works, from an artist point of view it was great to meet collectors and some fellow photographers. So definitely worth the trip. I made some great new friends and met up with some old friends too.

How important are these fairs  for photographers especially and galleries in general?
I think they are an important channel to meet collectors of photography, both for the artist and the gallery. It’s also interesting to see what people are responding to. To gauge interest in my work and see whats working and what isn’t. Personally it has inspired me to really push the darker side of my photography and to work towards more extensive projects and stories..

You are currently working on the project „Wild dogs in Paris“ – please tell us: What’s the story behind it?

Wild Dogs in Paris was inspired by a Helmut Newton quote:

„People gave us everything for free. We were allowed only so much film per picture, but there was no limit to the creativity. I like to say that they let us loose like wild dogs in the streets of Paris.“

We aim to promote work thats free and true to the vision of the photographer, so personal work or commercial/editorial work where the photographer has been given the freedom to shoot and edit without constraints from clients or editors. This is rare these days, so most are very personal works. We fund photographers wishing to pursue interesting projects. Wild Dogs in Paris was set up to support creative work and will also collect work from featured photographers. We will also have a show in Berlin hopefully early next year with Magic Beans Gallery.

What else is coming up next for you?

I’ve wanted to work on a book for years and I have two strong ideas in mind. I also want to launch a small magazine with a couple of friends, which would be photography based. Then depending on time some more travel . I feel like I should shoot a lot more personal work and so I will also continue a few personal projects…so lots to do! 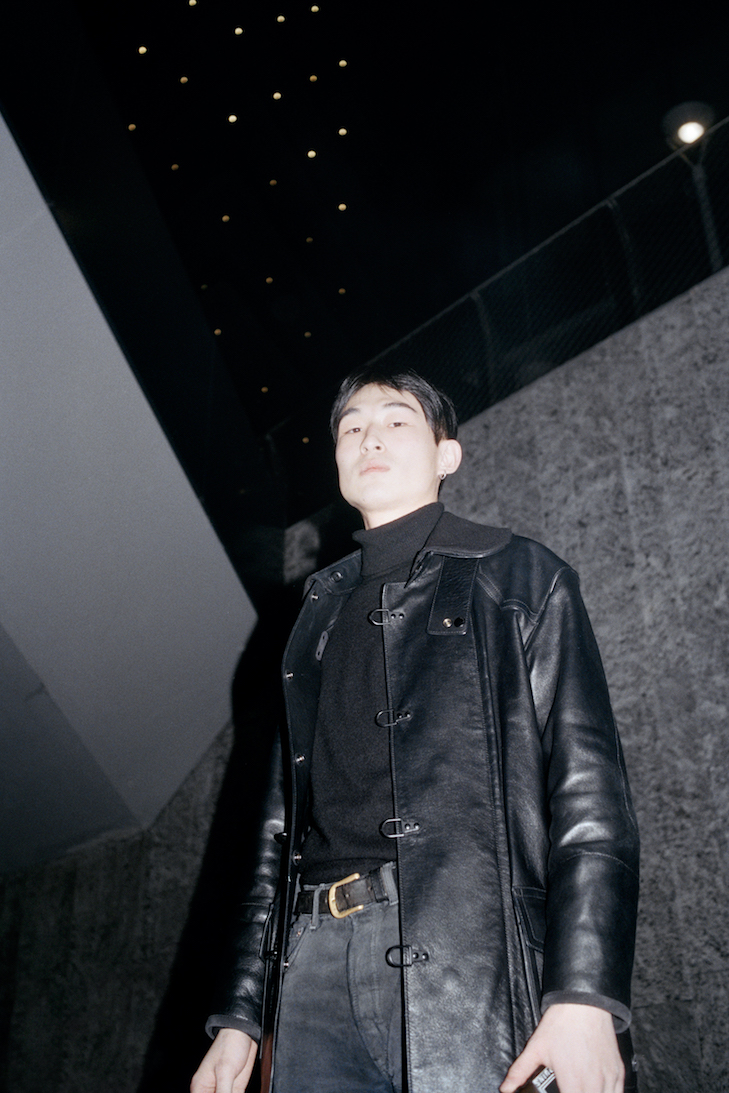 It was a more than pleasant surprise to meet Berlin based upcoming young artist Eirikur Mortagne who’s first solo show last year in September, Mama ich liebe dich made quite some noise. He was recently featured at the „Frames of Berlin 17“ groupshow at Fellini Gallery and was visiting Milan to shoot a new series for his next exhibition.

Definitely an artist to watch out for! 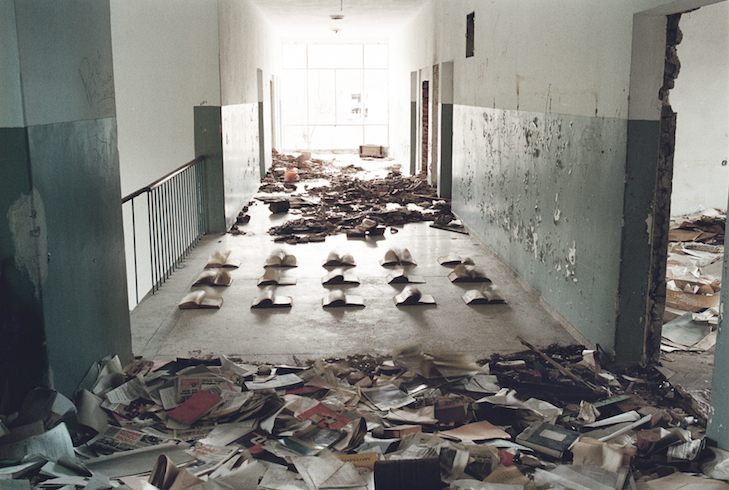 Jovana Popic’s artistic position is entirely different: her works on display enabled the viewer to dig into forgotten places and destinies and was a series of photographs titled “Archaeology of Knowledge”.

„Inspired by Foucault’s* thoughts on knowledge, the photographs employ art as a tool in the exploration of the relation between knowledge and destruction. Each photograph in the series is a part of continuous process of inquiry about possible relations between the found artifacts, used for the dissemination of knowledge, and their present surrounding. The medium of photography, intertwined with the medium of installation, is used as a tool for transformation of those artifacts, with an aim of questioning their original purpose (dissemination of knowledge).“

Her work won her the Codice Mia prize 2016 for the best portfolio and body of work. 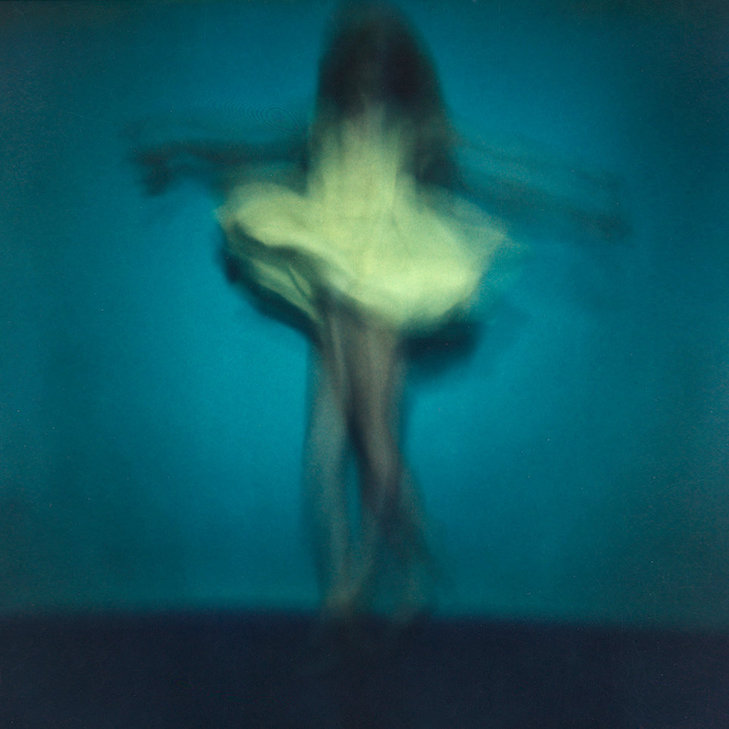 The Amsterdam based photographer was definitely one of the gems at the fair. His gripping two series „Future Heors“ and „Forgotten Grace“ showed young girls in transition to womanhood. His works mesmerised visitors, who stayed transfixed before his works. The blurry effect is the result of an experiment he started when he was still studying photography. When asked about it Joris told us that in the beginning he couldn’t see the beauty of this effect he had created. Only a year later he understood the impact it had. As the technique is unpredictable, the form and the shape is too. He never has full control of the outcome. An apt metaphor for life itself. 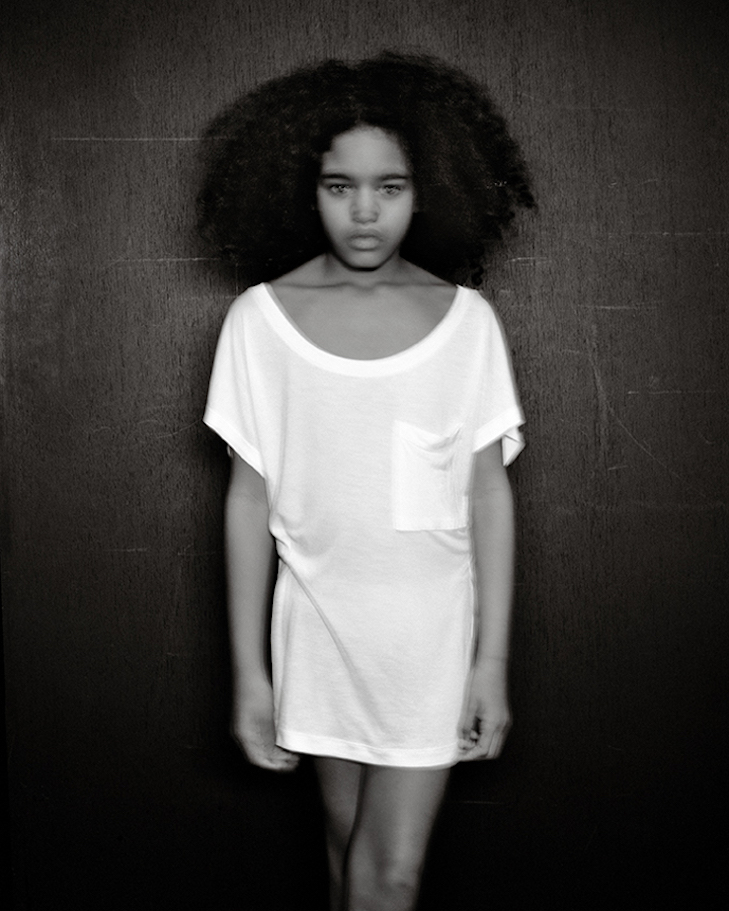 After so much photography we were been drawn into the Palazzo Reale, located directly next to the „Duomo de Milano“. The pure white glowing marble of the Duomo stood in stark contrast to the cave-like atmosphere of the Palazzo Reale.

The Keith Haring show „About Art“ at the Palazzo Reale is an absolute Must-See if you happen to be in Milano this summer. It is on display till 18th of June and is showing 110 works from private and public collections from all over the world, some of of them unpublished. The whole composition of this exhibition gives a real chance to dive into the mindset of this outstanding artist and activist, as it sets his works in context with artists and art he was inspired by, such as Jackson Pollock, Paul Klee, Jean Dubufett but also pre-columbian art and pacific masks. Unfortunately we were forbidden to take photographs, which is ironic considering Keith Haring wanted his art to be accessible to everyone, frequently exhibiting in public spaces. Still first world problems of course. 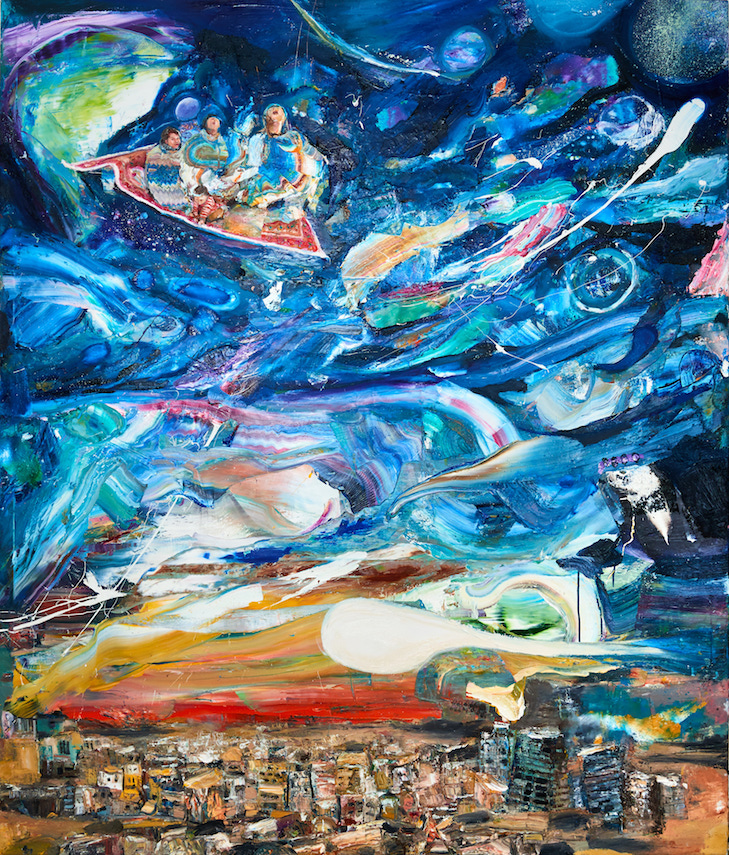 We are ending our Milano themed wrap-up by returning to our favourite city: Berlin. The milanese artist Stefano Bosis is preparing his upcoming solo exhibition, at MagicBeans Gallery, which shows his distinctive way of seeing life, art and himself in it. You can always find his mindset in his works, especially the larger formats give us an idea of a reality that is in front of us but we often don’t dare to acknowledge.

Stefano you grew up in Milano, Italy. How did this backround shape you, your work as a painter or your worldview as a traveller?

Milano, as every city or place a person grows up, made me understand that freedom doesn’t have a certain shape. Art connects you with the universe and the nature. Clouds change shape and change place. So I think of myself as a cloud that follows the wind. 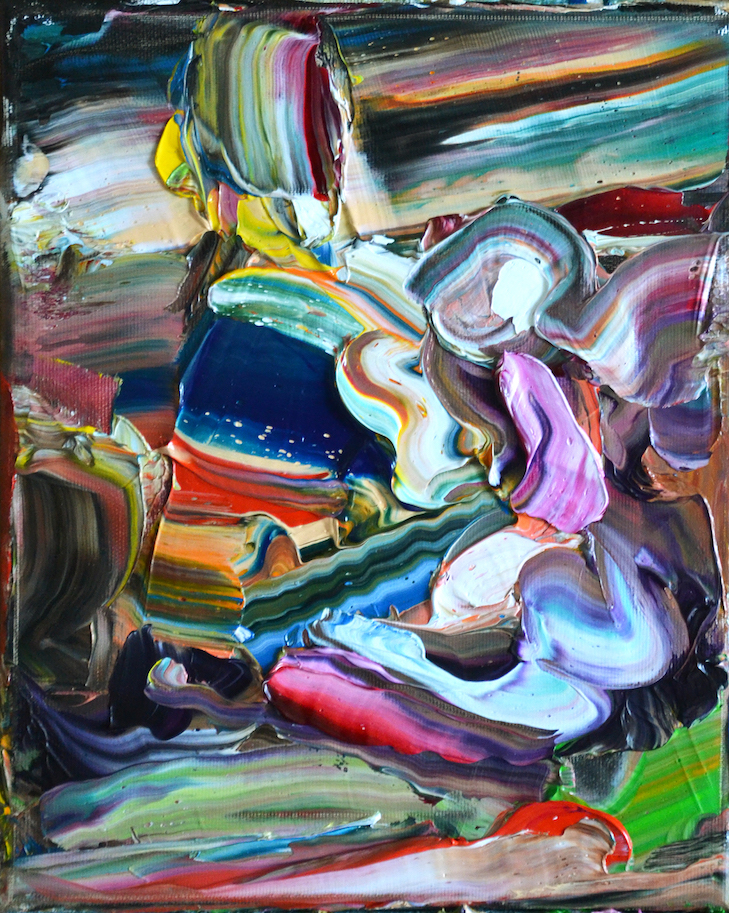 Some of your new works seem to have a mechanical feel, or even an alien style to them, compared to older works from last year. What happened?

The difference between then and now, is that I’ve been on many trips and had many experiences in the meantime.
I was invited for an art residency in Colombia, that I actually I never attended, because when I arrived there I decided to explore the city and the surroundings, hiking and talking to the people there. Then there was the Central America trip, where I followed the path of the Indios, discovering an ancient world called “The Jungle”. It made me jump in to the lost paradise, realizing that we don’t need many objects to live and thrive, if we are surrounded by nature.

We just need one thing: to believe in people and in love.

It became obvious I had to bring everything I saw and experienced into my paintings.  And talk to another jungle: “Europe”. We must call to mind, what we risk to loose. 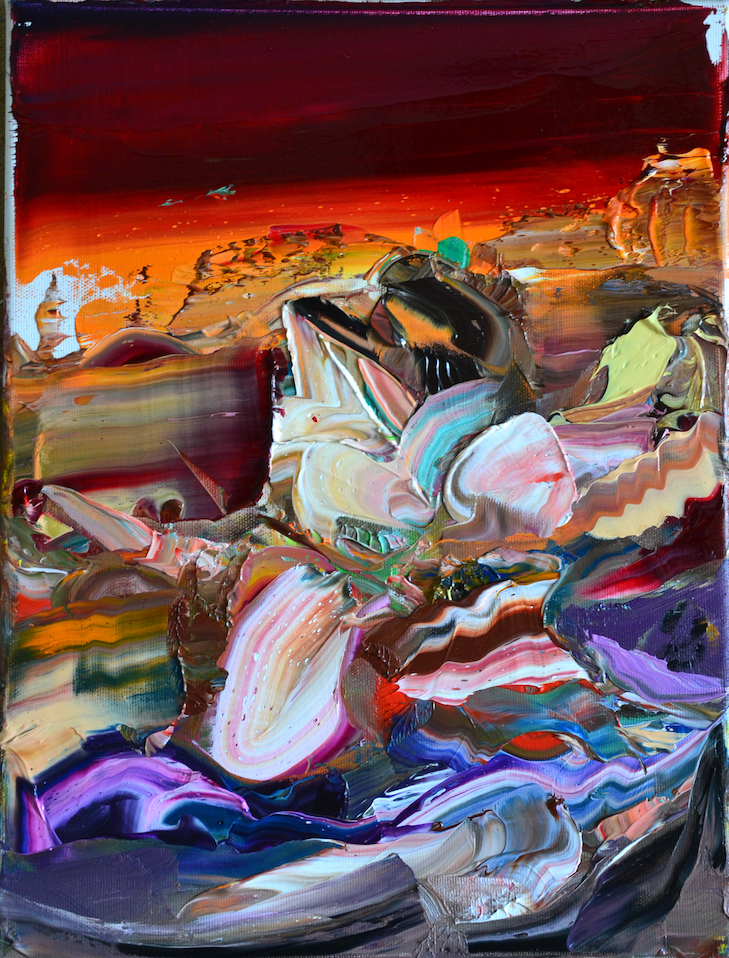 When I talk about something, I talk with a smile. I decide to make the fear dance, the terror and paranoia laugh – accepting and integrating them in a surreal world with no time. We see what we believe, and I paint what I believe: that xenophobia, racism, fear can be seen as characters of an hilarious comedy on a stage. To test and parody this behaviors, to see them as we were the public.  If we can look at everything from a detached point of view, we can decide where to focus our energies and not to be overwhelmed by bad emotions. Since years Aliens have been appearing in my paintings, because it is the way I can talk about xenophobia, the fear of the difference. One of the last paintings you have seen in the group exhibition was an “Alien In Love”. So there is always hope.

Also an alien can love, because actually he is not so different, even though he comes from another planet. 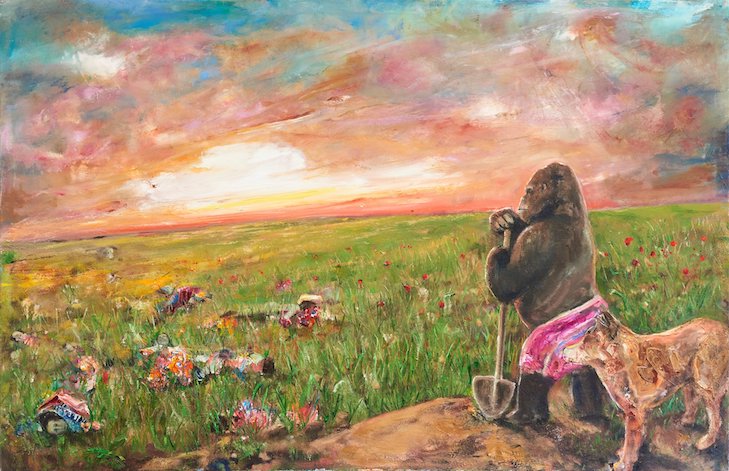 The magic carpet painting is a much bigger format, than you usually work in. Tell us about the process – can you remember the starting point of this wonderful work?

YES. The larger scale – change is always a reason to evolve. Trying something I am not used to. The idea, or actually the heart of the painting came by a desire, a sublime wish. I want to help somehow with my work, to give, to contribute to human kind and world where we live. I want my paintings to bring and spread happiness, positive power, joy and love to all the people and, like the wind, sweep away all the fears the human being has inside. I want to show that for changing something outside, we first have change inside. Because everything has its consequences. We are one in this complex scene we try to understand. Those where my intentions when I painted the “Flying Carpet”.
When I started the painting I was watching news about Syria, thinking about their rich culture and history. I wanted to save them. As a painter, if color is my power, if painting is magic, I decided to put a family on a magic carpet and make them fly away– probably what many Syrians are wishing right now. The process was simple: I started from the hell (the city destroyed) and I followed up to the purgatory to reach the paradise of the sky with the carpet.  To depict all of this I needed a bigger canvas.

Final question: In your work as an artist, what is the most important aspect for you, especially when it comes to the relationship between your works and the viewer?

Build the bridge between what you see and what you feel, between the rational and the irrational, and make the people dream.